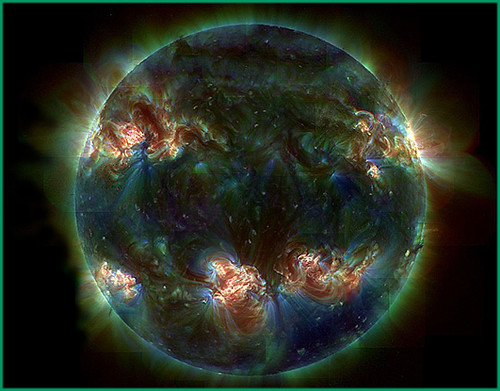 Several weeks ago theoretical physicist Dr. Stephen Hawking posited a question on Yahoo!Answers about the survival of the human race. At first, many believed that it was a hoax since they assumed that the question was posted by someone pretending to be the famous author of “A Brief History of Time.” But it was not a hoax. The question really was posted by Dr. Hawking and it was quite simple: “How can the human race survive the next hundred years?” The responses to his question have been impressively voluminous – with 24,785 answers as of the date of this post. Not only has his question drawn a great deal of attention, but it has also garnered a wide variety of proposed answers. I am always fascinated when scientists contemplate this question – it is an indirect acknowledgement of mankind’s limitations. It is also an affirmation of this plain truth – that we live in a very hostile universe, from the most distant galaxies to the very inhabitants of planet earth. Above all other dimensions of hostility in this universe, mankind is the greatest manifestation of hostility because he is the hostile enemy of God (Romans 5:8-10) and this is why men are in constant enmity with one another (Romans 3:15). Therefore, the warfares and crimes of men are simply a secondary illustration of mankind’s primary enmity with the Creator. This is the most serious and obvious hostility that we see illustrated on a daily basis. But there is yet another aspect of hostility in this universe in which we live:

(1) First of all, there is space itself. The average temperature of space is 2.73 Kelvin, or -454° fahrenheit. A human body subjected to such an extreme temperature would freeze instantly. However, even if you could remove the problem of temperature itself, the vaccum of space, along with the absence of breathable air, would kill you anyway.

(2) The nearest star to planet earth (the Sun) is a raging beast. Left to itself, it would eventually become a red giant before it collapsed into a white dwarf. In such a red giant phase, it would expand to such an extent so as to engulf the orbits of Mercury, Venus and the Earth. But even before this could ever happen, it would have increased in its energy output enough to destroy all life on Earth anyway.

(3) Then there is the constant threat of incoming asteroids. What most people do not know is that there is a branch of modern cosmology that is growing rapidly and is focused on tracking asteroids that may pose a risk to Earth. NASA itself is increasing its budget for the NEO program (Near Earth Orbit Program) in order to track possible risks. What has sparked interest in this subject recently are the several near misses have have occurred in the last three years, including a number of asteroids that were completely undetected because they approached the Earth from our astronomical blind spot – the sun. In fact, one astroid came so close that it passed between some of our orbiting satellites and the earth itself (2004 YD5).

Based upon the current models of cosmology, we’re all gonna die – eventually. Of course, as Christians, we know that the present Heavens and Earth will be destroyed – not by natural causes, but by the Creator Himself who will subject all of creation to His final judgment. But what is interesting to note is that the modern scientist understands that humanity cannot endure this hostile Universe – even if he survives the next 100 years, mankind will face some form of catastrophe, they surmise. But instead of looking to the Lord, who has promised to create a new Heavens and new Earth (Revelation 21:1), men are trying to find ways to establish a new earth by their own strength and wisdom. Below is a video of a BBC program (Space with Sam Neill: New Worlds) which surveys some of this very form of scientific fantasy. It proposes how we could possibly make other planets and moons habitable for our use in the future. Frankly, it’s a bunch of science fiction which denies our ultimate fate as fallen humans, but I would encourage you to watch the program and even consider how you might use it as a witnessing tool with unbelievers that you know. Without the Lord, this BBC program is depressing and hopeless! But this is why I would suggest that it would be a helpful tool to use with others for the sake of the Gospel. It is 30 minutes long and at times a bit frustrating to watch, but when you have a moment, I would encourage you to take a peek at it.

My review of this film:

Romans 1:22-23: 22 Professing to be wise, they became fools, 23 and exchanged the glory of the incorruptible God for an image in the form of corruptible man and of birds and four-footed animals and crawling creatures.