The Religions of Violence 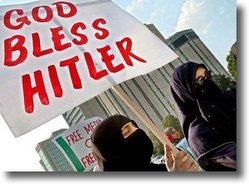 It grieves me deeply when I hear people pontificate that Islam is a peaceful religion – because – this simply is not true. I would suggest to you that when people make such confident assertions that they could be doing so as a result of personal ignorance, intellectual denial, or perhaps because of a blatant attempt to deceive others. No matter what the reason, it is important to understand that Islam’s history and doctrine speaks for itself. In recent days we have been watching the dreadful story of Mr. Rahman who converted from Islam to Christ, and for that, he was slated for a trial and execution (under Islamic law, that’s simply the way it goes). Now we have learned that Mr. Rahman has been released from custody, but only to undergo a psychiatric evaluation. Perhaps they are doing this to prove once and for all that Christian’s are indeed fools for Christ (1 Corinthians 1:23). As it stands, he is still faces the mob of obedient Muslims who are quite ready and eager to tear him to shreds:

Senior Muslim clerics are demanding that an Afghan man on trial for converting from Islam to Christianity be executed, warning that if the government caves in to Western pressure and frees him, they will incite people to “pull him into pieces.” His trial has fired passions in this conservative Muslim nation and highlighted a conflict of values between Afghanistan and its Western backers.

“Rejecting Islam is insulting God. We will not allow God to be humiliated. This man must die,” said cleric Abdul Raoulf, who is considered a moderate and was jailed three times for opposing the Taliban before the hard-line regime was ousted in 2001. [AP News, via CNN]

Sadly, many believers suffer throughout the world in nations that do not supply the same freedoms that we enjoy here in America. What is happening to Mr. Rahman is not an isolated incident; but there should be no surprise that such a conversion should be treated in this manner – without a doubt, the Qur’an advocates fighting and violence against infidels (unbelievers). Here are just a 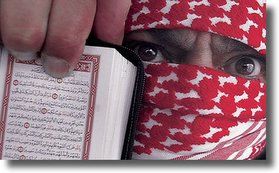 few texts which support such violence:

Muhammad: 1. Those who reject Allah and hinder (men) from the Path of Allah – their deeds will Allah render astray (from their mark). 2. But those who believe and work deeds of righteousness, and believe in the (Revelation) sent down to Muhammad – for it is the Truth from their Lord – He will remove from them their ills and improve their condition. 3. This because those who reject Allah follow vanities, while those who believe follow the Truth from their Lord: Thus does Allah set forth for men their lessons by similitudes. 4. Therefore, when ye meet the Unbelievers, smite at their necks; At length, when ye have thoroughly subdued them, bind a bond firmly (on them): thereafter (is the time for) either generosity or ransom: Until the war lays down its burdens. Thus (are ye commanded): but if it had been Allah’s Will, He could certainly have exacted retribution from them (Himself); but (He lets you fight) in order to test you, some with others. But those who are slain in the Way of AllahÂHe will never let their deeds be lost. [Ali, A. Y. (2004). The meaning of the Holy Qur’an (Electronic version.) (Surah 47, Muhammad, 47:4)].

Strangely, there are those who wish to hold out for a better hope: that Islam will someday render a new doctrine of peace, despite the religion’s violent progenitor (Muhammad) and its “sacred scriptures” that clearly proclaim a message of hatred and revenge. Perhaps such optimists are hoping that the religion of Islam will be overrun by some Arabic version of postmodernism, thus degrading it into a rabid form of liberalism (a guy can have his dreams can’t he?). Those who believe that true Muslims will someday become infidels to their own religion, by political means, are holding on to a mere dream. Political diplomacy may offer a temporary restraining order on such violence – but this will not last.

Of course, we have only been speaking of physical violence here. Spiritually speaking, we must remember that no religion of mankind can supply true and lasting peace – ultimately, all such religions are violent because they are not founded upon the only source of peace in this world:

Ephesians 2:14-15: 14 For He Himself is our peace, who made both groups into one, and broke down the barrier of the dividing wall, 15 by abolishing in His flesh the enmity, which is the Law of commandments contained in ordinances, that in Himself He might make the two into one new man, thus establishing peace [NASB].

It is the Lord Jesus Christ alone who establishes peace between God and man; and between Jew and Gentile. Without Him – there is no peace. The Apostle’s indicative expression – “He is our peace” is a clear reference to the body of Christ – the church. The church is a unique creation that has been brought together in the genuine peace of Christ, thus, the true church possesses a present and real peace with God through the shed blood of Jesus Christ. Such peace is not the present and indicative possession of the world – the only way in which the children of wrath (Eph. 2:3) can taste this peace is by trusting the Savior for His finished work on the cross. Until then, men remain at enmity with God (John 3:36, Romans 5:9-10) as the active enemies of the cross (Philippians 3:18-19).

Thus, no religion of man can be called “peaceful” in the truest sense. Because of this, calling Islam a religion of peace is no small error – it is erroneous by several orders of magnitude. But let us hope and pray for genuine peace. Let us pray for Mr. Rahman; for those around the world who are watching his witness for Christ; and let us pray that the Prince of Peace (Isaiah 9:6) will bring about a great awakening of souls throughout the world through the message of the Gospel of Peace (Ephesians 6:15).