The Audacity of Communication 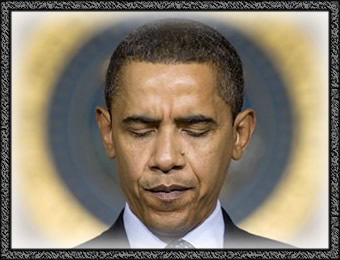 The disgraced nuclear scientist Abdul Qadeer Khan was released from house arrest today, despite the fact that in 2004 he admitted to transferring nuclear secrets to “other countries.”  As you might imagine, the FBI would like to know which countries received such data, and when.  This is yet another demonstration that our relationship with the Muslim world cannot be simplified with quaint sayings like: “America is not your enemy.”  Too many today are seeking the destruction of our nation in the name of Islam, and thus more measured expressions are needed.  I fear that our present leaders are all too fearful of offending anyone, and thus they are inclined to speak to our enemies with genteel exhortations like: “unclench your fists.”  Hillary Clinton has weighed in on the matter with similar platitudes, saying that this matter is “unfortunate” and that she is “very much concerned” by Khan’s release.  As weak as this is, it may be the toughest communication that we may get.  In a White House press conference today, Robert Gibbs responded to this crisis as follows.

Q (Reporter): Is the President concerned that Pakistani nuclear scientist A.Q. Khan will be a proliferation risk, now that he’s been released from house arrest? And will he renew the US request for him to be interviewed by US intelligence?

A (Robert Gibbs): Uh, obviously we’ve seen the reports of the release, but have not received, uh, have yet to receive official word, uh, from the government. Uh. Obviously this President has made clear, uh, many times, the great concern he has for nuclear proliferation, uh, and, uh, as we hear from the government about, uh, these reports, uh, obviously, uh, the President, uh, and this government want assurances that, uh, that Dr. Khan is not involved or engaged in, uh, any of the activity, uh, uh, that resulted in, uh, in, in his house arrest earlier.

In a vain effort to decipher Mr. Gibbs “response” I decided to endure the task diagramming the above collection of verbs, adverbs, participles and “uh” particles – the word “uh” seems to be growing in value and meaning in the Obama administration these days: 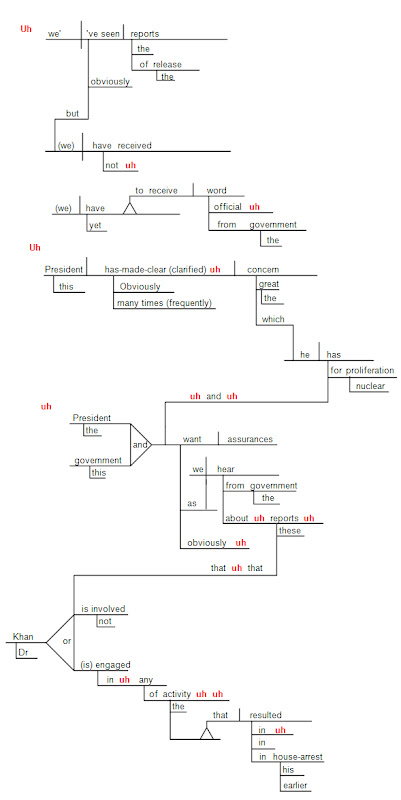 Any sentence can be diagrammed, no matter how strained it may be.  All that a diagram reveals is either the clarity or confusion of a speaker.   What is not revealed in the above Christmas tree of words is how the president expects to secure “assurances” that Dr. Khan won’t be up to his same old tricks once again.  Receiving assurances from Khan, or the Pakistani government, would be of little value.  Those who participate in clandestine and illegal operations, which endanger the world, do not elicit much in terms of hope and trust.

What the American public may soon learn about leadership is that confidence without character and conviction is both dangerous and confusing.  What the Obama administration communicates is not only for our own nation, it is for the entire world – because the world is listening – especially our enemies, and they want to see if there is a clear resolve coming from our present leadership, or if there is uncertainty and fear.

Sadly, the above volley of word-garble communicates the latter rather than the former.

If this does nothing else to your soul, let it drive you to your knees to pray even more earnestly for those who are in governing authority.  May God have mercy on our nation.