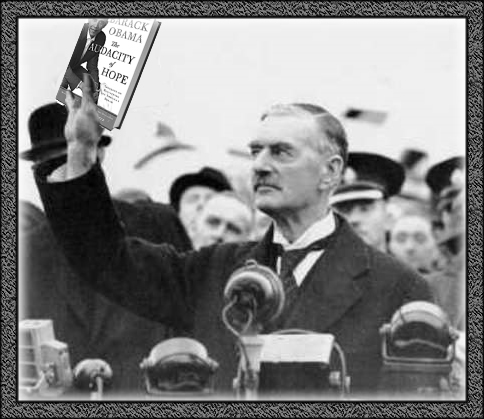 Barack Obama’s first television appearance as president took place on Al-Arabiya TV, where he offered various concessions regarding America’s dealings with Muslim nations. Within that interview he stated to the Muslim world – “America is not your enemy.” This broad statement is at best confusing, especially in view of the relentless Islamic Jihad that is being waged against our nation. In “The Dangers of Appeasement” video below, we consider why it is that Mr. Obama’s concessions are, if anything, dangerous:

For the full video of Al-Ansari, see the video below (this video is unedited and contains explicit video/pictures of holocaust victims):

Final note: ever since Mr. Obama made his concessions on the Al-Arabiya television network, we have seen the enemies of our nation become more and more emboldened.  In particular, Iran’s president Ahmadinejad demanded an apology from the United States for past crimes, and as well, Iran demonstrated the reality of their global threat by recently launching a satellite.  By failing to take these threats seriously, we give America’s enemies time to prepare further for their Jihad.  Europe has become the world’s open experiment concerning the melding of Islam with western civilization, and the results are alarming (content warning [some violence & language]):

Talking about “hope” and “change” may run well in an election with those who are easily swayed by such shallow platitudes – but it is useless when facing real enemies in what is a very real world.