Welcome to the Latest Movement in Church Ministry: The SeekErgent Movement

Yes – here it is ladies and gentlement. Allow me to introduce to you the never-before-seen – SeekErgent™ Movement (or SEM™). It’s a new, authentic-marketing approach to church ministry.

Perhaps I should apply for the trademark now before it actually does become the next “new” thing!

Alright, I confess that this isn’t a new movement, but all the discussion concerning the seeker and emergent movements of late has made me wonder what will be the next fashionable thing in the American church. Right now it is the “Emergent Movement” with the “Seeker Sensitive Movement” now passing into ancient history. Amidst all the present discussion concerning these issues, it is important to remember that while there are practical differences that distinguish these movements, it is more important to comprehend their philosophical roots, rather than investing too much time cataloguing their distinctions. At the end of the day, these movements come from the same fundamental defections:

1. There is a failure to correctly understand the nature and doctrine of the church which leads to…

2. A corruption of doctrine concerning the church’s relationship with and ministry to the world.

I will address these defections in two brief posts, beginning with the first matter concerning the nature of the church: 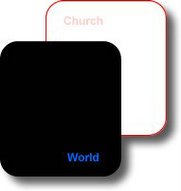 The Nature of the Church: There are many today, especially those in the emergent movement (EM), who believe that unbelievers can become a part of the “Christian community” simply by their interaction with believers, or by their involvement with the activities of the church. The philosophy behind this form of thinking is one which ultimately minimizes, and even nullifies, the distinction between the church and the world. To say that unbelievers become a part of the Christian community simply by their interactions with Christians is a dangerous error. The danger is twofold: 1. It leaves the unbeliever with the false impression that one can become a part of the “Christian community” apart from faith in the Savior Himself, and 2. It fosters the false notion within the church that such a “Christian community” should be comprised of something other than believers in Christ. It is this latter point that is tantamount to justifying just a little leaven into the bread of Christ’s church. It is important to correctly identify the source of such a philosophy in order to reveal what is at the heart of the seeker and emergent movements:

“Let the church become infused with and conformed to the world – then it will be effective in reaching the world.”

The problem with this form of thinking is multifaceted such that we could spend hours nitpicking the details of the emergent and seeker philosophies, dissecting their particulars; but I believe that it is much more important to identify the fundamental nature of this popular philosophy and thereby make haste to 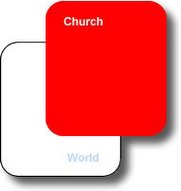 pursue the solution – emphasizing it above all else. At the heart of it all is the failure to see the word church in the color red; and by this I mean that we should think of the precious blood of the Savior when we think of Christ’s bride (Ephesians 5:23-27), for without the fountain of His blood – there would be no church.

Ephesians 2:13-16: 13 But now in Christ Jesus you who formerly were far off have been brought near by the blood of Christ. 14 For He Himself is our peace, who made both groups into one and broke down the barrier of the dividing wall, 15 by abolishing in His flesh the enmity, which is the Law of commandments contained in ordinances, so that in Himself He might make the two into one new man, thus establishing peace, 16 and might reconcile them both in one body to God through the cross, by it having put to death the enmity.

Christ created [ktizo] this “one new man” which Paul clearly identifies as the church [Ephesians 2:17-22]. This one new man, comprised of God’s elect among the Jews and the nations of the world (the Gentiles), was formed and fashioned by the hands of the crucified One, therefore we cannot forget that this “one new man” is covered from head to toe by the blood of Christ. Therefore, when we think of the church, we must think of the flowing blood of the Savior.

POINT: There is only one way to become a part of this community – and it is not by the institutions or programs of man; it is solely by the priceless blood of Jesus Christ.

To suggest that there is another way to become a part of this one new man is dangerous at best. In like manner, to redefine the nature of the church trifles with the priceless blood of the Lamb. The church is not a social club which defines its “community” by an arbitrary set of standards; and it must never be a place which communicates to the world that the lost can become a part of this special “community” by any other means than through redemption in Christ. It is a community that is unique, alien and lives out the Gospel to such an extent that the world can clearly see that there is a difference:

Acts 5:11-14: 11 And great fear came over the whole church, and over all who heard of these things. 12 At the hands of the apostles many signs and wonders were taking place among the people; and they were all with one accord in Solomon’s portico. 13 But none of the rest dared to associate with them; however, the people held them in high esteem. 14 And all the more believers in the Lord, multitudes of men and women, were constantly added to their number,

I can just imagine a conversation between a 1st century believer and a modern “evangelical”:

1STCC: “What happened at your church today?”

MOD-E: “Oh, we had impressionistic dance, a dramatic presentation, a puppet show and a short message. What happened at your church?”

1STCC: “Two people were judged by God when they lied about their giving; the whole church has been overcome with awe over the wonder of God’s holy and powerful work in our midst; and while the community around us has been gripped with much fear over these things, still the Lord is constantly adding to our number… but uh, no puppet shows…& what’s ‘impressionistic dance?’”

The saints of the past would barely recognize what many refer to as the church today. The glory of Christ is unique, and is incomparable to the world’s “glory.” In like manner, the Savior’s glory in the church is unique, and is clearly diminished when the world is allowed to influence her privilege of worship. Like the church at Laodicea, those who choose to mix the dark ways of this world with the Savior’s church, concoct nothing but a rejectable mixture of truth and error: 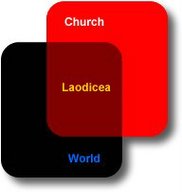 The color of Christ’s church is regal-red and is not to be mixed with the dark and corrupt philosophies of this world (Ephesians 2:1-3). Thus, in the worst of all cases, those who dabble in such admixtures produce a ministry that would be likened to a kind of skubala-brown – which truly speaks for itself.