Is the Earth at the Center of the Universe? 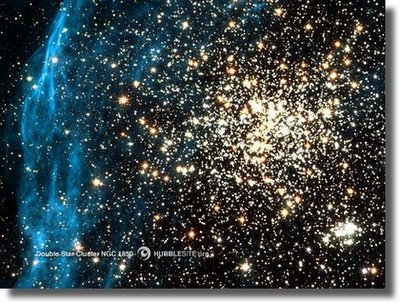 The created Universe is so far beyond our ability to grasp that we can only speak of it in terms of speculative numbers, while having no experiential grasp of its enormity. When scientists train their most powerful telescopes on the farthest reaches of the Universe they find that space is populated with an incomprehensible assembly of billions of galaxies, each containing billions of stars themselves. With each and every discovery of this fathomless Universe, many have further deduced the absence of God. It is common for the secular mind to conclude that the miracle of life on earth is relatively inconsequential; but though God’s Universe is vast, beyond understanding, this does not mean that mankind is distant from God’s care, plan and purpose. To understand God’s purposes in creating the vast heavens and all that is in them, we must begin with the book of Genesis, the book of beginnings. The word Genesis itself comes from the Greek work gignesthai which means to be born or begotten. It is no wonder that this book of beginnings brings us immediately to the scene of all beginnings whereby in the beginning, God created. And this was no strenuous event for the omnipotent God, requiring vast epochs of time, rather “…by the word of the Lord the heavens were made, And by the breath of His mouth all their host.” On the first day of Creation we see the Lord creating, out of nothing, all the heavens and the Earth as a kind of cosmic sermon that continually declares the vast wisdom and glory of God: “The heavens are telling of the glory of God; And their expanse is declaring the work of His hands.” What God made on the first day was vast and incomprehensible, and yet it exists subordinately for the glory of God and for the habitation of man.

It is a temptation within our human nature to see the expanse of the Heavens and then to conclude that man is irrelevant and insignificant: but such thinking must be corrected with the truth of God. Consider the reflections of the psalmist David in Psalm 8:3-4 as he considers the significance of man in the eyes of God: “When I consider Thy heavens, the work of Thy fingers, The moon and the stars, which Thou hast ordained; What is man, that Thou dost take thought of him?” When David considered the vastness of space itself, he felt small and insignificant. Compared to the Universe we are small and insignificant! But there is a more important consideration than man’s physical stature in Creation. Mankind was created as a unique spiritual being, uniquely designed to serve and worship the Creator. These truths from the first few pages of the book of Genesis recalibrated David’s contemplation in Psalm 8: “5 Yet Thou hast made him a little lower than God, and dost crown him with glory and majesty! 6 Thou dost make him to rule over the works of Thy hands; Thou hast put all things under his feet….” This passage gives us a very important point: As miniscule as man is, he is at the center of a cosmological stage upon which the eternal God is displaying the magnitude of His wisdom, mercy and grace. Though mankind is inestimably miniscule in the vast cosmos, he is the very centerpiece of all that God has made. This understanding of man’s centrality in God’s created order has clashed much with modern philosophies and sciences and as a result, many in our society truly believe that the Bible has nothing helpful to say about man or the Universe.

With this in view, there has been an interesting debate among creationists concerning whether the Earth is at the physical center of the known Universe or not. Almost all contemporary versions of geocentricity deal with the question of the physical center of the overall universe, rather than with our Solar system (as in the Ptolemaic system of thought, i.e. the Earth is the center of the solar system). This debate may never be resolved as long as our studies of the Universe remain limited by the imperfections of scientific observation. But to resolve the question of the earth’s physical centrality is ultimately non-essential since we know that the Earth is at the spiritual dead center of all that God has made. And with all of the displaced mass of stars and planets in the Heavens, there is only one important stage whereby God’s Providence and redemption are being manifest.

But for the very few who have ever maintained the myth of the Greek philosophers: that the Earth is at the center of our solar system, they still have the difficult task and burden of having to justify their views by means of Scripture, rather than by ancient philosophy. Historically, those who have presented such views have typically advanced their arguments based upon just a few texts of Scripture:

1 Chronicles 16:30 Tremble before Him, all the earth; Indeed, the world is firmly established, it will not be moved.

Psalm 93:1 The Lord reigns, He is clothed with majesty; The Lord has clothed and girded Himself with strength; Indeed, the world is firmly established, it will not be moved.

Psalm 96:10 Say among the nations, “The Lord reigns; Indeed, the world is firmly established, it will not be moved; He will judge the peoples with equity.”

The repeated expression in each: “the Earth shall not be moved” comes from the Hebrew construction bal timot which means that it [the Earth] will not falter or fail. It is the same expression used of the Psalmist to speak of the believer’s security in the Lord: “He will not allow your foot to slip [be moved], He who keeps you will not slumber.” The idea is not that of absolute immobility (the Psalmist is not saying that his feet are locked in cement), rather it carries the idea of beneficence and security. The thoughts expressed in the former verses have to do with the fact that the Earth will last as long as God has ordained that it will – it will not falter or perish one day sooner because it is established by His decree. And yet, it will be “moved” with great violence someday – Matthew 5:18 “For truly I say to you, until heaven and earth pass away, not the smallest letter or stroke shall pass away from the Law, until all is accomplished”

All this should point out the problem of taking the Scriptures beyond their proper interpretation. In addition to this, just because the Bible refers to Jerusalem as being at the “center of the nations” (Ezekiel 5:5), should it then be assumed that Jerusalem is actually in the center of the earth rather than being located on the surface of the Earth at latitude 32° , longitude 35°? Texts such as these remind us that there is a difference between the physical and spiritual centrality of anything, and context and careful exegesis should guide our thinking rather than the faulty traditions men.