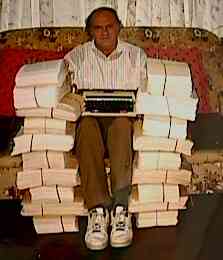 After 16 years at the typewriter, Mr. Les Stewart from Mudjimba (Australia) established a new world record. On November 25th, 1998, Mr. Stewart completed his objective of typing from one to one million without the use of any numbers; instead he typed it all out in full-length words (on a manual typewriter). His final entry (of course) was –

This massive project required a great amount of resources: seven manual typewriters, 1000 ink ribbons, 19,890 pages and over 16 years of his life!

The linked article above then goes on to say: “When asked why he has undertaken this time consuming and repetitious task, Les says that he has little else to do now that he has been classed as an invalid, and can no longer work. Besides that, Les enjoys typing and used to be a police typing instructor before his 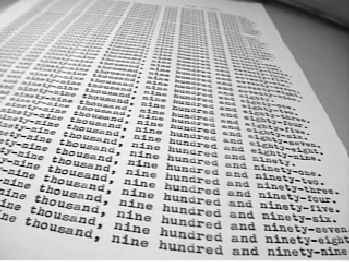 sickness which meant his withdrawal from the force. Typing an average three pages a day with one finger since April 1982, Les said his secret was to type for 20 minutes on the hour, every hour.”

It is interesting to me that the world would look at this and count it all as useless and vain – a labor that amounts to nothing. However, I would suggest to you that even men of “great” achievement, learning, and social status are not any better if they are living out their lives for their own glory, rather than to the glory of God. You see, in eternity nothing will matter save those deeds that have been accomplished by the children of God, who labor by the Lord’s grace and for His ultimate glory (1 Corinthians 3:10-15). Therefore, let a man find the cure for cancer, solve world hunger and even save our nation from nuclear catastrophy – but if such deeds are not done for the glory of Christ, then it is all assessed as being wood, hay and straw. Yes, there is a qualitative difference between wood, hay and straw – as there might be between a cure for cancer or typying from one to a million – but apart from Christ, all such deeds will go up in a billow of smoke that will be forgotten in eternity. With this in mind, it is important to remember that many go about in their lives being very impressed with their own works and achievements in life – many of whom would snicker at Mr. Stewart’s meaningless “achievement”; however, do these same people have any sense of eternity in all of their “important” tasks in life? Do they not comprehend that without Christ, the works of men are assessed as the acts of madmen who are going to the grave?:

Ecclesiastes 9:3: 3 This is an evil in all that is done under the sun, that there is one fate for all men. Furthermore, the hearts of the sons of men are full of evil and insanity is in their hearts throughout their lives. Afterwards they go to the dead.

The inhabitants of hell will not care about the earthly deeds of men because in that place of eternal torment, men will finally comprehend that the One of matchless value and worth was the very Lord whom they despised and rejected; and for this, all of their lives and their deeds will be counted as loss. Such a meditation as this should remind us as believers that our life and labor must always be centered upon the person and work of the Lord Jesus Christ. As well, this meditation should also remind us that our stewardship of sharing the Gospel should not be affected by who it is that we share Christ with. Whether we have the opportunity to speak to men of great power and reputation, or to people whose lives are devoted to pointless tasks – all in all, they need Christ just the same – just like we do.

2 Responses to Vanity of Vanities