There Is No Injustice in God

There is no injustice in God – period.

Right? Most of you would consider this to be too simple a concept to be worthy of a debate since it is of course such a primitive concept – isn’t it? Of course it is a simple truth, however, this statement’s simplicity should not deceive us into thinking that its impact on Christian doctrine is in any way small. Those who compromise this simple truth, in any way, enter into the dark domain of idolatry; after all, a god who is unjust, is no God at all. This very truth is one that is stringently defended by the Apostle Paul throughout his epistle to the Romans as evidenced by the fact that the Apostle employs the term dikaios 64 times in reference to the righteousness of God, or the unrighteousness of man. Central to this theme is the crucial truth of justification by faith in Jesus Christ; and so central was this theme of the Justice of God that, in two instances in Romans, Paul raised the question of whether we should believe that God is unjust. In each of these cases, Paul forcefully responded with “may it never be!” Through this inductive process, Paul teaches us that such a hypothetical deity cannot save, nor judge humanity in any way. In one such instance, Paul reminds us that the Lord’s sovereignty over evil, does not make Him an unjust God:

Romans 3:5-6, 5 But if our unrighteousness demonstrates the righteousness of God, what shall we say? The God who inflicts wrath is not unrighteous, is He? (I am speaking in human terms.) 6 May it never be! For otherwise how will God judge the world?”

The Lord’s sovereign dealings with sinful men do not taint His perfect holiness in the slightest bit. This is equally true concerning our salvation. When God saves a sinful man, He does not nullify His justice in any way. When a sinner is forgiven of his sin, it is not because God had chosen to forsake His holiness and justice – may it never be! No, God remains just when He graciously forgives the sinner, because Christ died for sinners as their righteous substitute (Isaiah 53:5): Christ personally bore their sin, and the penalty of their sin when He died upon the cross (Gal. 3:13):

Galatians 3:13 Christ redeemed us from the curse of the Law, having become a curse for usfor it is written, “Cursed is everyone who hangs on a tree.” 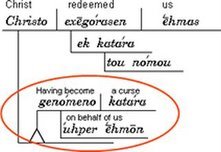 The entire verbal adjective in this verse (circled in red above), further defines the work of Christ’s redemption, and is therefore foundational to our understanding concerning the very means of our redemption. Periphrastically, we could present this verse in this way: “Christ, who become a curse on our behalf, redeemed us from the curse of the law.” In other words, it is because Christ became our penal substitute on the cross, that He could redeem us from the curse of the law. By bearing our sin, and the wrath of God that we deserved in view of our sin, Christ perfectly satisfied God’s demand for justice: He who knew no sin, became sin on our behalf, that we might become the righteousness of God in Him (2 Corinthians 5:21). Without this reality of Christ dying as our substitute (having become a curse for us), there can be no redemption of sinners. Therefore, it is by Christ’s righteous sacrifice that God remains just, while justifying the sinner who believes in Christ:

Romans 3:24-26: 24 being justified as a gift by His grace through the redemption which is in Christ Jesus; 25 whom God displayed publicly as a propitiation in His blood through faith. This was to demonstrate His righteousness, because in the forbearance of God He passed over the sins previously committed; 26 for the demonstration, I say, of His righteousness at the present time, that He might be just and the justifier of the one who has faith in Jesus.

God is just. He remains just when He justifies the sinner who has faith in Christ, because Christ died as his righteous substitute, having become a curse in his stead. This crucial reality is called the doctrine of penal substitution. While there are many, many other truths which flow from the doctrine of Christ’s atonement, this crucial understanding of Romans 3:5-26 cannot be cast aside as though it were irrelevant or optional. Like the doctrine of the resurrection, the truth of Christ’s penal substitution on our behalf stands as a crucial foundation for God’s justice and our redemption in Him. Without such truths as these, we would remain condemned in our sins, having a worthless faith, being most pitied in this life as fools who are without hope (1 Corinthians 15:12-19).

But thanks be to God that He is just, and He is the justifier of all who have believed in the One who became sin on our behalf, and now lives to intercede on our behalf.