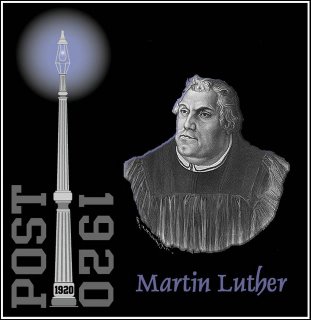 Without a doubt, Martin Luther’s work – The Bondage of the Will is a favorite of mine. If there is one thing that I appreciate about Luther – he doesn’t beat around the bush when dealing with Biblical doctrine. I strongly recommend his work to you. In reading this work you will find that some of the very battles that he faced in his day are also with us today. In particular, this published contest of his with Erasmus reminds us that the primitieve roots of error are always deeply planted in the soils of human wisdom and reason, whether in the past or the present. In his counter argument against the popular doctrine of free will, Luther contested the tactics of those who sought to advance their doctrines by avoiding many clear texts of Scripture. It is the historic habit of liberal thinking to call clear texts ambiguous, especially when those texts seem to threaten any system of thought in liberal theology. In his section on the Clarity of Scripture (or the Perspecuity of Scripture, as some translations have it), Luther refuted the shallow tactics of those who sought to ignore clear doctrines, by falsely claiming that certain relevant Scriptures were simply unclear.

Of The Perspicuity of Scripture: All the things, therefore, contained in the Scriptures; are made manifest, although some places, from the words not being understood, are yet obscure. But to know that all things in the Scriptures are set in the clearest light, and then, because a few words are obscure, to report that the things are obscure, is absurd and impious. And, if the words are obscure in one place, yet they are clear in another. But, however, the same thing, which has been most openly declared to the whole world, is both spoken of in the Scriptures in plain words, and also still lies hidden in obscure words. Now, therefore, it matters not if the thing be in the light, whether any certain representations of it be in obscurity or not, if, in the mean while, many other representations of the same thing be in the light. For who would say that the public fountain is not in the light, because those who are in some dark narrow lane do not see it, when all those who are in the Open market place can see it plainly? [The Bondage of the Will, That the teaching of Scripture is clear and decisive, pp. 73-74].

That the Teaching of Scripture is Clear and Decisive: In a word, if the Scripture be obscure or ambiguous, what need was there for its being sent down from heaven? Are we not obscure and ambiguous enough in ourselves, without an increase of it by obscurity, ambiguity, and darkness being sent down unto us from heaven? And if this be the case, what will become of that of the apostle, “All Scripture is given by inspiration of God, and is profitable for doctrine, for reproof, for correction?” (2 Tim. iii. 16.) Nay, Paul, thou art altogether useless, and all those things which thou ascribest unto the Scripture, are to be sought for out of the fathers approved by a long course of ages, and from the Roman see! Wherefore, thy sentiment must be revoked, where thou writest to Titus, (chap. i. 9) ‘that a bishop ought to be powerful in doctrine, to exhort and to convince the gainsayers, and to stop the mouths of vain talkers, and deceivers of minds.’ For how shall he be powerful, when thou leavest him the Scriptures in obscurity  that is, as arms of tow and feeble straws, instead of a sword? And Christ must also, of necessity, revoke His word where He falsely promises us, saying, “I will give you a mouth and wisdom which all your adversaries shall not be able to resist,” (Luke xxi. 15.) For how shall they not resist when we fight against them with obscurities and uncertainties? And why do you also, Erasmus, prescribe to us a form of Christianity, if the Scriptures be obscure to you!

But I fear I must already be burdensome, even to the insensible, by dwelling so long and spending so much strength upon a point so fully clear; but it was necessary, that that impudent and blasphemous saying, ‘the Scriptures are obscure,’ should thus be drowned. And you, too, my friend Erasmus, know very well what you are saying, when you deny that the Scripture is clear, for you at the same time drop into my ear this assertion: ‘it of necessity follows therefore, that all your saints whom you adduce, are much less clear.’ And truly it would be so. For who shall certify us concerning their light, if you make the Scriptures obscure? Therefore they who deny the all-clearness and all-plainness of the Scriptures, leave us nothing else but darkness.

Sect. XXXVII.  BUT here, perhaps, you will say  all that you have advanced is nothing to me. I do not say that the Scriptures are every where obscure (for who would be so mad?) but that they are obscure in this, and the like parts.  I answer: I do not advance these things against you only, but against all who are of the same sentiments with you. Moreover, I declare against you concerning the whole of the Scripture, that I will have no one part of it called obscure: and, to support me, stands that which I have brought forth out of Peter, that the word of God is to us a “lamp shining in a dark place.” (2 Peter i. 19.) But if any part of this lamp do not shine, it is rather a part of the dark place than of the lamp itself. For Christ has not so illuminated us, as to wish that any part of His word should remain obscure, even while He commands us to attend to it: for if it be not shiningly plain, His commanding us to attend to it is in vain. [The Bondage of the Will, That the teaching of Scripture is clear and decisive, pp. 128-129]

Deuteronomy 29:29 “The secret things belong to the Lord our God, but the things revealed belong to us and to our sons forever, that we may observe all the words of this law.”