Should You Believe in the Trinity? 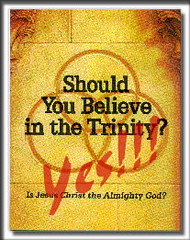 Not long ago I had the opportunity to preach through John chapter 1:1-18.  Overall, I must confess that this section of Scripture has been a vast blessing to my own heart.  One thing that we have sought to understand in this portion of Scripture is John’s big picture concerning the person and work of Christ. In reality, this entire section is all about the supremacy and glory of Jesus Christ. From beginning to the end, John’s point is to lead us to humble worship before the One who is by nature God Himself. The introductory verses in this section establish this remarkable truth concerning the deity of Jesus Christ. Particularly in verse 1, John tells us very plainly about the deity of the Son of God in what amounts to 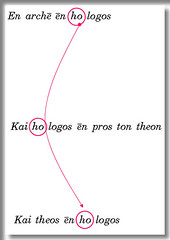 three simple clauses which focus on the nature of the One called the Word:

What I love about this opening is that John reaches back further than any other Gospel in order to show us the glory of the Son of God. Rather than starting his gospel with a genealogy that goes back to Abraham, or to Adam – John goes all the way back to eternity: before the creation of the heavens and the earth. It is here, in this brief glimpse of eternity, that John brings us face to face with the One who has always been; to the One who was the instrument of all creation (John 1:3).  This One who is called the Word is clearly the Son of God, who came to this world and became a man:

John 1:14: 14 And the Word became flesh, and dwelt among us, and we saw His glory, glory as of the only begotten from the Father, full of grace and truth.

In our day, many people will acknowledge the humanity of Jesus Christ, and yet, John is telling us us so much more about this One whom he calls the Word. First of all, John’s repeated use of the verb was shows us that the Son in fact always existed in eternity with the Father. The verb that John uses is key – 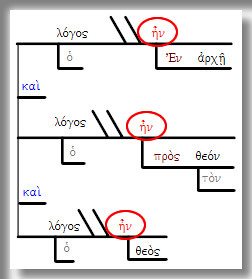 it is an imperfect active indicative form of the word eimi – to be. This is the verb of existence, and John’s use of the imperfect is crucial in each clause.  The imperfect verb is the verb of perpetuity – continual action. In the context of John 1:1, it underscores the reality that the Son existed perpetually with the Father.  This is underscored by the adverbial phrase in beginning [the article is omitted here because in the Greek, the word arche, beginning, is anarthrous – without the article].  When John says that “in beginning” the Word was [perpetually], he clarifies the fact that the Word exits perpetually. Though the heretic Arius taught that “there was a time when the Son was not…” John clearly refutes this when he says – “in [the] beginning was the Word.” This first clause also reminds us that the Son is antecedent to, and is the sole source of, creation; and this is presented once again in verse 3:

In the second clause of the three [in verse 1], John tells us that the Word was a distinct person who was with God (“…and the Word was with God…”). This statement is repeated in verse 2 when he says “He was in the beginning with God.” This point keeps us from assuming an absence of separate persons within the Godhead, as was the case with Sabellianism – an early church heresy that believed that the Father, Son and Holy Spirit were simply different modes of revelation of one god. This teaching ultimately refuted the Trinity, but John’s instructions here give us a clear plurality of persons within the Godhead.

Having thus established the distinct identity of “the Word,” John then unveils this climatic truth: “…and the Word was God.” In this last statement, John tells us that the Word Himself was by nature all that God is. That is, He Himself possesses all of the same 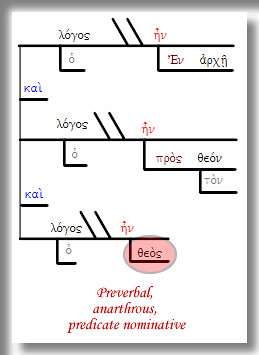 attributes and essential nature of deity.

Now Jehovah’s Witnesses will refute this translation and say that it should read (as their own Watchtower translation does):

Their twisted translation is often related to the misuse of several grammatical rules. In their work “Should You Believe in the Trinity?” they cite a “rule” which deals with preverbal anarthrous predicate nominatives (PAPN).  That’s a mouthful, I realize, but in plain terms this is simply a noun which functions as a predicate nominative (a PN is a noun which follows the linking verb [is, was, be] and modifies the subject); as well, the PAPN is placed before the verb (preverbal) and it lacks an article (anarthrous).  The rule that they cite is called Colwell’s rule and they use it inappropriately in order to say that the word theos (God) is indefinite (a god), rather than being qualitative (God).  Unfortunately for the Watchtower Society, their use of this rule demonstrates their deception such that they twist Colwell’s rule in order to make it say and mean something that is completely contrary to the intent of the “rule” itself.  Colwell’s analysis was very limited and therefore it barely qualifies to be called a rule; as Daniel B. Wallace, in his book Greek Grammar Beyond the Basics, observes:

What Colwell did was to try to find PAPN constructions that he believed were definite to begin with.  The problem with his research, therefore, is that he assumed too much about the sentence constructions that he examined, and this is why Wallace mentions how even Colwell “misunderstood” his own research.  What the Watchtower Society then ignores is the fact that many scholars have come to realize the limited use of Colwell’s rule, as in the case of men like Philip B. Harner and Paul Stephen Dixon.  What these men confirmed, is what Wallace summarizes above – that the converse of Colwell’s observations must not be assumed – namely that a PAPN is necessarily definite (or indefinite), rather than being qualitative.  If this is too much for you – consider the obvious:

This leaves us with the clear conclusion that the PAPN in question (theos) is qualitative (a very common use of anarthrous nouns) and therefore it is teaching us that the Word was by quality God – sharing all the same essence of deity with the Father.  This has been the historic understanding of John 1:1, and centuries of grammatical observation have further confirmed that interpretation.
But this is not the first time that JW’s have had a run in with Greek grammar, and the grammarians who contribute to such studies.  In fact, in the Jehovah’s Witness Kingdom Interlinear (p. 1158-59) they cite Julius Mantey’s Manual Grammar in order to support their twisted translation of John 1:1.  The following responses from Julius Mantey supply a very embarrassing rebuke:

Mantey:  “Since my name is used and our Manual Grammar of the Greek New Testament is quoted on page 744 to seek to justify their translation, I am making this statement… of all the scholars in the world, as far as we know none have translated this verse as Jehovah’s Witnesses have done. If the Greek article occurred with both Word and God in John 1:1, the implication would be that they are one and the same person, absolutely identical. But John affirmed that “the Word was with (the) God” (the definite article preceding each noun), and in so writing, he indicated his belief that they are distinct and separate personalities. Then John next stated that the Word was God, i.e., of the same family or essence that characterizes the Creator. Or, in other words, that both are of the same nature, and that nature is the highest in existence, namely divine…. The apostle John, in the context of the introduction to his Gospel, is pulling all the stops out of language to portray not only the deity of Christ, but also his equality with the Father. He states that the Word was in the beginning, that He was with God, that He was God and that all creation came into existence through him and that not even one thing exists that was not created by Christ. What else could be said that John did not say?”

Mantey to the Watchtower Society, in a letter dated July 11, 1974: “In view of the preceding facts, especially because you have been quoting me out of context, I herewith request you not to quote the Manual Grammar of the Greek New Testament again, which you have been doing for 24 years. Also that you not quote it or me in any of your publications from this time on.  Also that you publicly and immediately apologize in the Watchtower magazine, since my words had no relevance to the absence of the article before theos in John 1:1…. On the page before the Preface in the grammar are these words: ‘All rights reserved—no part of this book may be reproduced in any form without permission in writing from the publisher.’ If you have such permission, please send me a photocopy of it. If you do not heed these requests you will suffer the consequences. Regretfully yours, Julius R. Mantey”

The publishers of the Watchtower Society should be ashamed and embarrased.  To have such a public rebuke as this (from a man that they cite in support of their own argument) is utterly shameful.  Clearly, the JW will garner any deception and lie necessary in order to advance their false religion.  Let there be no confusion here – the Jehovah Witness religion is a non-Christian cult.  As Christians we must be on guard against such teachings, not only for our own sakes but also for the sake of others who may fall into the trap of such heresy.  The doctrine of the Trinity is a core doctrine of Christian orthodoxy.  Without such truth as this, we could never walk in the light.