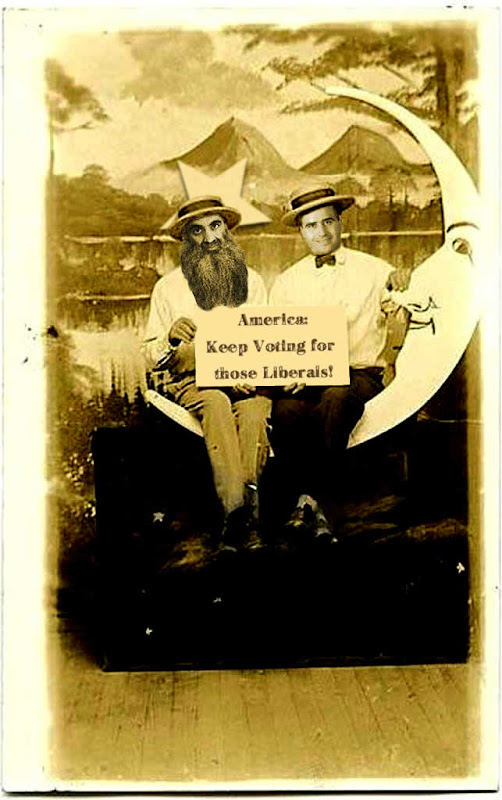 By this I mean that, in the broader scheme of things, our nation’s capitol is spiritually dead.  Thus whatever kernels of wisdom may still exist there, we can be sure that such rarities are utterly buried beneath a mountain of chaff…

…and it doesn’t appear that this vast pile will be blowing away anytime soon.

Despite the better intentions of our nation’s founding fathers, America’s governmental structure has become a self-absorbed and self-perpetuating monster, and the politicians who direct this behemoth do so for the sake of their own wealth and empowerment.  It is for this reason that we see a growing tendency for lawmakers to legislate in a vacuum of consideration of our nation’s genuine needs, not to mention the needs of the future generations who will follow us.  What has been dizzying about the past year and a half is that the number of bad policies streaming out of capitol hill has been gushing at a rate which makes it impossible to filter and sort through it all.  But this is no accident.  Strategically speaking, Washington knows very well how impossible it is for the American public to drink from such a policy fire-hydrant; let alone from a gushing, unfiltered sewer pipe.

The most recent policy fiasco comes to us via our nation’s characterization and treatment of Muslim jihadists.  Liberal educators, the media, as well as politicians have practically written, in blood, their own manifesto regarding what everyone must think and believe concerning Islam: that it is “a peaceful religion.”  Politically speaking, this motif has been created by both Democrats and Republicans (to one degree or another), and thus my criticism here is not partisan, nor is it about politics per se.  What I write here is a rebuke against what has become a bipartisan convergence of foolishness that is endangering our nation.  Those who prescribe the mandate for the presumption of Islamic innocence reveal a false dilemma that should be quite obvious to anyone who would care to observe it: if Islam is such a “peaceful religion” (as we are instructed to believe), then why do we see such a steady stream of bloodshed and violence committed in the name of Allah?  Rather than admit the obvious (that Islam is not an inherently peaceful religion), liberals are compelled to find another villain in order to sustain their precious narrative; after all, someone is to blame for all this violence.

And who or what is this villain?  Well, depending on who you may ask, the answer usually lands in the realm of -anyone who may criticize and oppose Islamic ideology.  Thus, the Muhammad cartoons of yesteryear were thought to be a legitimate basis for Islamic retaliation and violence.  Our foreign policies toward Islamic states (which are mostly hated for their advancement of religious freedom) are thought to give Muslims a cause for slaying more infidels.  And after 8 years of the supposed “Bush-Hitler” era, we find that our military is a part of this equation of blame and justified violence.  The left’s diatribe against our nation’s war on terror became so vehement that they had no problem vilifying our military (thereby endangering them and our nation overall) all for the purpose of political power back home.  Therefore, the forced narrative of the liberal community became this: until we stop fighting Jihadists, we will only exacerbate and facilitate more Jihadist attacks against America.  Or to put it more succinctly:

the only way to achieve peace is by surrendering to our enemies.

This form of thinking was fodder for the antiwar crowd leading up to Barack Obama’s election late last year.  Now that he is in office, President Obama is realizing that the real world is much more complex than the mythological one in which he, and the people who voted for him, hoped to live.  Even now, the political ramifications of a hasty withdrawal of troops would be damaging to the Democratic party – and so we now wait to hear about the President’s next chess move in what is a perpetual pursuit of a checkmate for political power.

In this vein, I would like to play the Devil’s advocate for a moment, and offer advice on how this “Islam is a religion of peace” narrative can be advanced even further, especially in the wake of two unpopular wars, and as well, in the wake of two significant tribunals: the trials of Khalid Shaikh Mohammed (KSM) and Maj. Nidal Hasan.  I would submit to the reader that in the trials of KSM and Maj. Hasan, we have a potential convergence of this “if a victim, then a justified aggressor” motif that will further enrapture the left into their imagined Nirvana.  Never mind reality, facts, or believability – I am addressing those who rest on unreasoned hope and change, thus, here is my Devil’s advocacy:

Their Victimhood:  The narrative of Islamic victimhood must be advanced at all costs – even if it endangers our nation in its wake.  This will be necessary for our Attorney General, Eric Holder, as he requires more public support in order to probe and prosecute those public officials who supported the Bush-torture-era.  These two trials should supply him with all the help that he needs.  Concerning our two pawns in question, Maj. Hasan is a victim in view of the fact that he was constantly tortured by those who failed to endure his open advocacy of Islam; and he was tortured by the personal testimonies of those who received psychiatric counsel from him.  Leniency should be granted to him because he is a Muslim, and was no doubt psychologically abused by the testimony of such violent military personnel.  As for KSM, he is a victim in view of the fact that he was never read his Miranda rights when captured.  As well, he was water-boarded such that he, no doubt, was coerced into making confessions against his will.  Such an argument is no small matter.  KSM has a strong precedent of self defense based upon the recent release of the Cole bombing suspect Adb al-Rahim al-Nashiri who was also waterboarded, as confirmed by CIA director General Michael Hayden on February 6th, 2008.  As a defense against his prosecutors, al-Nashidri’s claimed to be compelled, through such torture, to render false confessions.  On February 5, 2009, al-Nashiri’s charges were withdrawn without prejudice.

Their Publicity:  Maj. Hasan and KSM will require a world stage upon which their victimhood can be seen by all.  America must be punished for its failure to appease the Muslim world, and the trials of these men will further this cause.  Maj. Hasan’s victimhood is already an established fact, especially as the media has been working overtime setting the stage for a proper narrative of victimhood – even disdaining the apparent ties between his Islamic convictions and his violence.    As for KSM, his trial has been advanced to the world stage in view of the fact that he will be judged in a civilian court.  Protected by a presumption of innocence, his accusers will be required to work from a legal ground zero in order to seek prosecution.  With the privacy that would have attended a military tribunal now eliminated, the media will have an unfettered stage in order to broadcast the story of a man who was tortured by the CIA and forced to make his confessions, just like al-Nashiri, whose story was muzzled because of his “enemy combatant” status.

Their Example:  The stories of these men, when dictated by the media to a listening world, will establish a paradigm of foreign policy for ages to come.  The anti-military narrative will enable us to further discussions concerning the need for American passivity, anti-nuclear proliferation, world cooperation, and ultimately, world peace.  Our ultimate goal will be the subjugation of all nations beneath a one world government, headed by the UN – which is the sine qua non institution for world peace.  These are only two trials of two different men, but the convergence of their victimhood narrative will, in time, serve much greater purposes beyond themselves.

I apologize for the disturbing nature of the above “Devil’s advocacy” – but I fear that it is all too real.  As the trial-circus proceeds, we should wonder: how many future “Maj. Hasans,” residing within the US, will be radicalized through the open testimonies of these two men?  These trials could last for years, and the liberal media will be running alongside them in order to broadcast the narratives of such victimized Muslims.

On another note, it is strikingly odd is to hear our political leaders pontificate about KSM’s guilt, and how he will pay the ultimate cost for his crimes.  But here’s a much needed news flash: he’s now being tried in a new legal venue (civilian court) as one who is not an “enemy combatant,” and within this new paradigm, no one is in a position to presume his guilt in this case.  What is revealing in these contradictions is the fact that many of our nation’s “lawmakers” have very little regard for the law.  Apparently, they just make things up as they go along.

Washington D.C. is lost.  The political monster which drives it is more interested in power and control than truth or justice.  The Lord said to the nation of Israel in Hosea’s day: “My people are destroyed for lack of knowledge” (Hosea 4:6).  History reveals that the signs and symptoms of national sin are very much the same, generation after generation.

May God have mercy on America.