Part II: Upon These Popes We Will Build Our Business 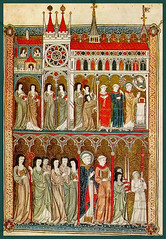 In a post on September 1st, 2006 called Upon These Popes We Will Build Our Business, I addressed the contradictions that were presented in an article written by Catholic Answers entitled Pillar of Fire, Pillar of Truth. In this article it was argued that historic Catholicism is the one and only true church, saying, “

“Jesus said his Church would be ‘the light of the world.’ He then noted that ‘a city set on a hill cannot be hid’ (Matt. 5:14). This means his Church is a visible organization…Jesus established only one Church, not a collection of differing churches (Lutheran, Baptist, Anglican, and so on).”

This, coupled with some other interesting articles over at Pulpit Live and then this article by Dave Armstrong at Cor ad cor loquitur, prompted me to address this error of thinking which says that the true church will have only one organizational manifestation – i.e. – Papalism. I concluded that article with the following:

It is clear that Rome’s vast religious empire is impressive – visibly speaking. Rome’s monetary vitality, its hierarchy, its legal and constitutional structure, along with its extensive array of traditions and culture, make it an amazing organization by the world’s standards; but not by the standards of God’s Word. As a business, it is indeed impressive, and it’s been around for a long, long time. But when we examine this empire in view of God’s Word we find that Roman Catholic unity is utterly bankrupt, such that those who come to saving faith from within such an organization do so despite the organization itself  as in the case of Martin Luther.

Roman Catholics typically try to prove their authenticity as the true church by pointing to what they believe is a long legacy of organizational and doctrinal stability over the centuries. What the previous post pointed out is that organizational stability cannot prove ecclesiastical authenticity any more than the appearance of the Moon can prove that it is made out of cheese. Appearances can be quite deceiving. In fact, the argument of organizational stability throughout the centuries actually works against the Roman apologist because of this simple fact: the whole world lies in the power of the evil one [1 John 5:19]. Long epochs of organizational stability, within a world that hates the true church, may be an argument that works to the contrary for those who would point to Saint Peter’s Basilica as evidence of ecclesiastical piety. Actually, the true church, throughout history, has been oppressed, persecuted, afflicted and thereby scattered throughout the world. A brief consideration of the first century church would illustrate that point well enough.

Oh yes – those “unfailing Roman Catholic doctrines throughout the centuries.” Anyone who posits an argument like this is simply barking up the wrong polemical tree. Rome’s doctrinal history is nothing less than a lesson on dynamism, and Loraine Boettner’s book, Roman Catholicism, is a classic work and wonderfully summarizes for us the tragic legacy of Rome’s evolutionary doctrine. The following survey unveils a theological monkey in the making:

Reading through this doctrinal descent is like watching a train wreck in slow motion: Catholic doctrine has been anything but stable or unified; most importantly, it has been anything but Christ-honoring. What has been stable throughout the centuries is the Gospel of Jesus Christ. It is the plain message of salvation by grace alone, through faith alone in Christ alone via the Scriptures alone – and all for the glory of God alone – that has been preserved throughout the generations amidst a church that has been variously persecuted, scattered and afflicted – however, Christ’s bride has always persevered by grace in the truth of the Gospel – for without the genuine Gospel, there is no salvation, nor godly perseverance. Thus, wherever the flames of Gospel truth do burn, there you have the Savior’s lampstand and city set upon a hill.

The true church doesn’t have one “Basilica” to which the Christian can point and declare – the Lord Jesus has built His church. Instead, the true church has existed wherever the Gospel of Jesus Christ has been proclaimed – with our without a building.

Ultimately, the Lord Himself, and His Gospel, is the church’s building; His truth is her firm foundation, of which Jesus Christ is the Chief Cornerstone.