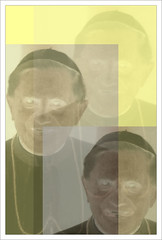 Just this last week, Pope Benedict XVI was in Turkey in an attempt to curb the hostile anger of muslims around the world for his speech made in Germany back in September. In that speech, the Pope quoted the 14th-century Byzantine emperor, Manuel II Palaiologos, who’s criticizm of Islam leaves little to the imagination. The Islamic seeth-fest that ensued illustrated for us all, once again, just how peaceful the religion of Islam isn’t. But this particular event almost made the Mohammed-cartoon controversey look like a…cartoon. Instead of standing by his words, the current Pope relented of his comments, indicating that Palaiologos’ views did not represent his own. Worse than this, Benedict called for a brotherhood between Christians and Muslims during his stay in Turkey. On the last day of his trip he attended the prayer services held at the Sultan Ahmed Mosque [the Blue Mosque]. The Pope faced Mecca, folded his hands in the Muslim tradition, and prayed:

The irony of all this could pass us by too easily should we fail to be mindful of Islam’s history. The background behind this modern day fiasco is profound indeed: the Sultan Ahmed Mosque [the Blue Mosque] faces another building called the Hagia Sophia, which is considered to be one of the greatest buildings in the world. Historically, it was an ancient Eastern orthodox cathedral that was converted to a mosque when it was overtaken by the Ottomans in 1453. Now it is a museum and historical monument to the history of violent Islamic conquest. But in addition to this, Benedict’s controversial speech made in Germany contained a citation from the very man who sought to withstand the Ottoman/Islamic onslought that turned the Hagia Sophia into an instrument of Islamic idolatry. It was in 1424 that Manuel II Palaiologos and his son, John VIII Palaiologos, were forced to sign a peace treaty with the Ottoman Turks, thus subjecting the Byzantine Empire to pay tribute to the sultan. It would be 29 years later that Constantine XI would utterly lose the kingdom at the siege of Constantinople. In this context, we see the great profundity of emperor Manuel II Palaiologos’ comments concerning Islam. Not only did he call Mohammed an instrument of things “only evil and inhuman” but he also said the following:

“God is not pleased by blood – and not acting reasonably is contrary to God’s nature. Faith is born of the soul, not the body. Whoever would lead someone to faith needs the ability to speak well and to reason properly, without violence and threats… To convince a reasonable soul, one does not need a strong arm, or weapons of any kind, or any other means of threatening a person with death…”

Clearly, Manuel II was willing to refute Islam’s dark doctrine of conversion by the sword. Not only did 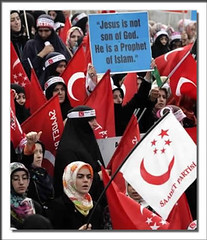 he do this through his words, but he also refuted Islamic violence in his attempt to protect the Byzantine empire. But in striking contrast, the official Vatican recantation has been supplied as follows: “…the Holy Father did not mean, nor does he mean, to make that opinion [Manuel II Palaiologos’] his own in any way. ” Benedict has thus sought to save face in the presence of the disciples of Mohammed. To do this, he entered into an Christ-denying temple of Islam and prayed with idolaters, while protesters stood outside with signs which read “Jesus is not [the] son of God, He is a Prophet of Islam.” Unfortunately, many in the world see the Pope as being the chief representative of the Christian world – but it should be clear, by his actions, that he is just as much an enemy of the cross as Mohammed himself. But there should be no surprise here: like his spiritual forefathers, Benedict would much rather save his skin for 30 pieces of silver, rather than be counted as a disciple of Christ. Judas himself would be proud. The whole thing is a sad affair. May the Lord have mercy on those who may be tempted to follow such conduct and doctrine.

Men do need reconciliation – but what they need is to be reconciled to God through faith in the Lord Jesus Christ alone. There is no other way to have true peace.