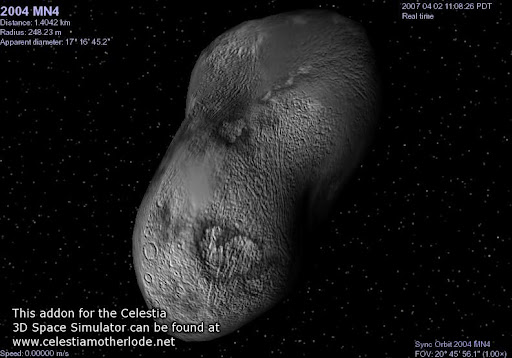 The final judgment narratives found in the Bible are located in the book of Revelation.  They begin in chapter 5 and culminate in Chapters 18 & 19 via the seven seal, trumpet, and bowl judgments.  In chapter eight, we find an interesting reference to one of these instruments of tribulation which is brought about by a “star” named Wormwood amidst the third trumpet judgment:

Revelation 8:10-11: 10 The third angel sounded, and a great star fell from heaven, burning like a torch, and it fell on a third of the rivers and on the springs of waters. 11 The name of the star is called Wormwood; and a third of the waters became wormwood, and many men died from the waters, because they were made bitter.

Interestingly, the English word “star” represents the Greek word – ἀστὴρ – from which root we also get the word asteroid.  In the case of “Wormwood” it is called ἀστὴρ μέγας  – which could literally be translated as “mega-asteroid.”  What the Scriptures predict NASA is coming to know, with increasing accuracy, in light of the greater accuracy and resolution power of the many telescopes in the world today.  NEO’s, as they are called (Near Earth Objects) are celestial objects that are being watched in view of the proximity of their orbits to that of the earth itself.  Only in recent years has NASA, along with other scientific organizations around the world, devoted such a large amount of time, energy, and research on this subject of NEOs – because the scientific data is revealing the truth that an astroidal threat is quite real:

As of March 31, NASA’s list of so-called near-Earth objects numbers 6,191. The catalog includes 773 objects one kilometer in diameter or larger and 1,042 objects — including Apophis — classified as “potentially hazardous” to Earth, according to the agency’s Near-Earth Object Program web site.

Because of the increasing knowledge of the cosmological threat that surrounds us, many have been seeking out ways to destroy or redirect incoming asteroids before they hit the earth, as evidenced in the video below:

One asteroid that is receiving more attention in recent days is the object known as Apophis.  Apophis is the Greek name of the Ancient Egyptian god Apep, “the Destroyer.”  NASA is convinced that Apophis will safely pass by the earth in 2029, but its return orbit is much more of a mystery.  When it does another flyby, this object which is the size of a 25 story building, may impact the earth.  If this is the case, Apophis may require a name change.  Nasa article here.  Wikipedia overview here.

P.S. My concluding suggestion that Apophis might require a name change is rather tongue-in-cheek.  Based upon Acts 1:7 I do not believe that we will know about the real Wormwood until it is nearly upon us (many asteroids are invisible to us due to the earth’s asteroidal blind spot).   Besides, Wormwood is called ἀστὴρ μέγας – and Apophis (at 1000 feet in length) isn’t all that “mega.”