Turning Aside to Myths 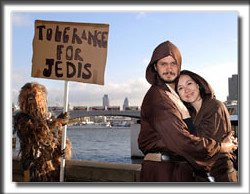 Being dubbed as Britain’s fourth largest religion, members of the “Jedi Knights” have filed a petition before the UN for formal recognition as a religion. “Umada” and “Yunyun” (pictured left) have taken their cause to the world council on behalf of some 390,000 Jedis in the United Kingdom. They believe that their cause is in agreement with the UN, and they desire a national Day of Tolerance, or in their own words:

‘Like the UN, the Jedi Knights are peacekeepers and we feel we have the basic right to express our religion through wearing our robes, and to be recognised by the national and international community. We therefore are calling upon the United Nations Association to change November 16 to the UN Interstellar Day of Tolerance, to reflect the religious make-up of our twenty-first century civilisation. Tolerance is about respecting difference where ever it lies, including other galaxies. Please don’t exclude us from your important work. May the Force be with you.’

This would be hysterically funny – if it weren’t at all true. But sadly – it’s the real deal, and it serves as a reminder that men will gladly believe anything but the truth. By nature, all men are inclined to believe in myths rather than in the living God:

2 Timothy 4:3-4: 3 For the time will come when they will not endure sound doctrine; but wanting to have their ears tickled, they will accumulate for themselves teachers in accordance to their own desires, 4 and will turn away their ears from the truth and will turn aside to myths.

As for “Umada” and “Yunyun” – they are John Wilkinson and Charlotte Law. May the Lord bring the Gospel of Jesus Christ to them both.