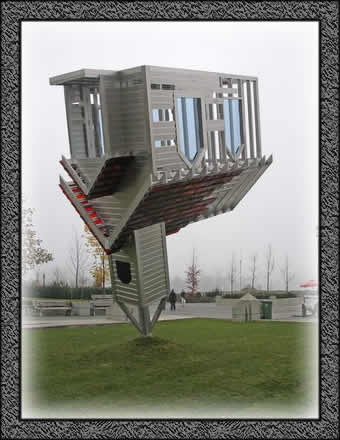 After years of ecumenical influences, America has resultantly become a nation of virtual Christianity.  Evangelicalism, having been turned on its head, has become a kind of meaningless label for a movement that only survives as a miniscule minority.  Here is a sad but interesting article regarding America’s most popular views about who will inhabit heaven:

In June, the Pew Forum on Religion and Public Life published a controversial survey in which 70 percent of Americans said that they believed religions other than theirs could lead to eternal life.  This threw evangelicals into a tizzy. After all, the Bible makes it clear that heaven is a velvet-roped V.I.P. area reserved for Christians. Jesus said so: “I am the way, the truth and the life: no man cometh unto the Father, but by me.” But the survey suggested that Americans just weren’t buying that.

The evangelicals complained that people must not have understood the question. The respondents couldn’t actually believe what they were saying, could they?

So in August, Pew asked the question again. (They released the results last week.) Sixty-five percent of respondents said — again — that other religions could lead to eternal life. But this time, to clear up any confusion, Pew asked them to specify which religions. The respondents essentially said all of them.

And they didn’t stop there. Nearly half also thought that atheists could go to heaven — dragged there kicking and screaming, no doubt — and most thought that people with no religious faith also could go.

What on earth does this mean?

One very plausible explanation is that Americans just want good things to come to good people, regardless of their faith. As Alan Segal, a professor of religion at Barnard College told me: “We are a multicultural society, and people expect this American life to continue the same way in heaven.” He explained that in our society, we meet so many good people of different faiths that it’s hard for us to imagine God letting them go to hell. In fact, in the most recent survey, Pew asked people what they thought determined whether a person would achieve eternal life. Nearly as many Christians said you could achieve eternal life by just being a good person as said that you had to believe in Jesus.

Also, many Christians apparently view their didactic text as flexible. According to Pew’s August survey, only 39 percent of Christians believe that the Bible is the literal word of God, and 18 percent think that it’s just a book written by men and not the word of God at all. In fact, on the question in the Pew survey about what it would take to achieve eternal life, only 1 percent of Christians said living life in accordance with the Bible.

Now, there remains the possibility that some of those polled may not have understood the implications of their answers. As John Green, a senior fellow at the Pew Forum, said, “The capacity of ignorance to influence survey outcomes should never be underestimated.” But I don’t think that they are ignorant about this most basic tenet of their faith. I think that they are choosing to ignore it … for goodness sake.

This is an interesting read.  If anything, I might conclude that the numbers may still be a bit generous regarding those who profess Christ and hold to inerrancy with true conviction.  It is a sad state of affairs – but the whole of our culture has come to believe in the religion of Bailoutism (or if you prefer, Ba’aloutism).  This is the religion of helpless victimization, non-responsibility, and the expectation that no matter how indifferent or rebellious a man may be, he can expect to be rescued in the end – simply because the entire universe owes it to him.

Sadly, we’ve been here before (Ecclesiastes 1:10-11), and won’t see the end of it until Christ returns to judge the living and the dead.