The Enemy of my Enemy Isn’t Necessarily my Friend 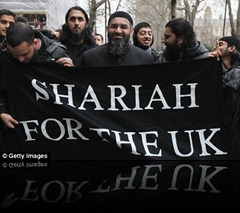 I won’t be addressing the larger question her, but one must wonder about the logic behind a belief which says that democracy can be exported to Islamic/theocratic nations:

CNN – Beliefblog:  An Afghan Christian, detained for months for allegedly converting to Christianity from Islam, could face trial as early as next week – and could face a potential death penalty, officials said Sunday.

Said Musa was arrested by Afghan Interior Ministry intelligence authorities near the German Embassy in Kabul because of the allegations, said Qamaruddin Shenwari, director of the Kabul courts’ north zone. The exact date of his arrest is not known.

The case against Musa has not yet been finalized, said Mohammad Najim Hamidi, director of public security at Zone 3 of the Kabul courts. He could face trial next week if the case is prepared by then, Hamidi said. It was earlier thought Musa’s trial would begin on Sunday.

The Afghan Constitution does not mention converting from one religion to another, so the judge will take Islamic law into account, officials said.

"According to Afghanistan’s constitution, if there is no clear verdict as to whether an act is criminal or not in the penal code of the Afghan Constitution, then it would be referred to sharia law where the judge has an open hand in reaching a verdict," Shenwari said.

Under sharia law, converting from Islam to Christianity is punishable by death.

It was not immediately clear where Musa was being held and whether he has access to his attorney or relatives.

The U.S. State Department said last week in its annual International Religious Freedom Report that "respect for religious freedom" decreased in Afghanistan in the last year, "particularly toward Christian groups and individuals."

Christians, Hindus and Sikhs – as well as Muslims whose practices don’t satisfy the government or society – suffer "intolerance in the form of harassment, occasional violence, discrimination and inflammatory public statements," the report said. It estimated the Afghan Christian community ranges from 500 to 8,000 people.

While I am a strong supporter of our military (as a veteran myself), I must question a foreign policy which strengthens the hand of any government supporting Sharia law.