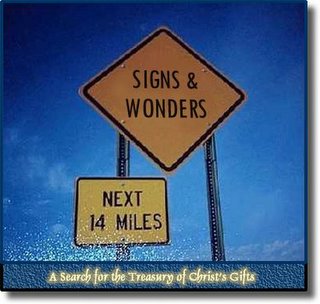 I am very eager to get into the texts which are normally found in the midst of the cessationism/continuationism debate. Partly because they truly get to the point of the controversy, but mostly because I have been so blessed through my studies in them, and am eager to share their riches. However, because the cessationism/continuationism discussion has often descended too quickly into a debate over a select number of verses, I decided to begin the series with the broader question concerning the importance of the debate. Thus, if it could be argued that this is a non-issue, or that it does not effect important matters of life and ministry, then it would be our responsibility to drop the matter right away and move on to something else; but in light of the Apostle’s clear association of the Savior’s sacrifice, with the gifts that He gave to the church (Ephesians 4:1-11), we should conclude to drop nothing, but instead proceed with an even greater appreciation for the importance of this discussion. In this particular post, The Absolute Sufficiency of God’s Word, we will address the relative purpose of God’s signs, wonders and miraculous gifts.

Last time we laid out at least four different purposes of God in His signs and wonders, and they are:

Concerning points two and three, we should remember that the Lord’s signs and wonders can either serve God’s redemptive purposes (John 4:43-54), or His purposes of judging the wicked (John 12:37-40). Overall, it is significant to affirm that the signs and wonders of God have been given for subordinate purposes. As in the list above, God gives His signs and wonders subordinately in order to disclose His glory among men; to confirm His Word; to affirm His messengers and to display His glory forever. That is what a sign does – it serves a subordinate role of pointing to something that is greater than itself. Like the sign that you see on the freeway which designates a city’s name and location, so too are God’s signs and wonders. When one sees a freeway signpost, he doesn’t climb the sign thinking that he has thus arrived at his destination – me genetai (may it never be!). Road signs are designed to lead us to a particular destination, but they are not the destination themselves. This principle of subordination (the subordinate nature of God’s signs and wonders) is one that is repeated throughout the Scriptures. There are many examples that we could consult, however we will take one very important sample – one that we will re-visit again in the future; Hebrews 2:1-4:

2:1 For this reason we must pay much closer attention to what we have heard, lest we drift away from it. 2 For if the word spoken through angels proved unalterable, and every transgression and disobedience received a just recompense, 3 how shall we escape if we neglect so great a salvation? which was at the first spoken through the Lord, it was confirmed to us by those who heard, 4 God also bearing witness with them, both by signs and wonders and by various miracles and by gifts of the Holy Spirit according to His own will.

The author of Hebrews wants his readers to pay very close attention to all that God has revealed in His Word:

1:1 God, after He spoke long ago to the fathers in the prophets in many portions and in many ways, 2 in these last days has spoken to us in His Son, whom He appointed heir of all things, through whom also He made the world.

His thoughts in chapter two are essentially a continuation of what he had to say about the life giving revelation of God in chapter one: what God has revealed in Jesus Christ, and through His appointed messengers, is the very message of salvation which we must not neglect. One of the significant aspects of chapter two is the manner in which the author of Hebrews explains how it is that God confirmed His revelation. There is a lot that is going on between verses 3b-4, however, much is clarified when we seek out the central (governing) verb amidst it all: 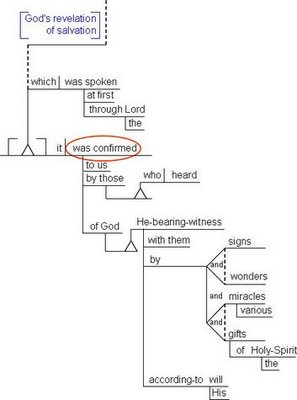 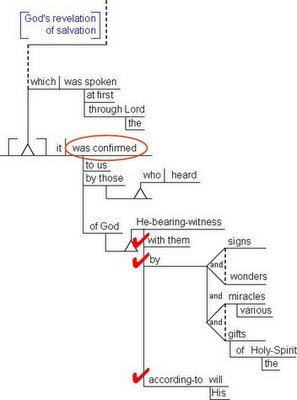 This generation of believers witnessed many great things indeed. What is crucial to understand is that what they witnessed was entirely given for a subordinate purpose, and that is the confirmation of God’s revelation concerning the salvation that is in His Son alone: 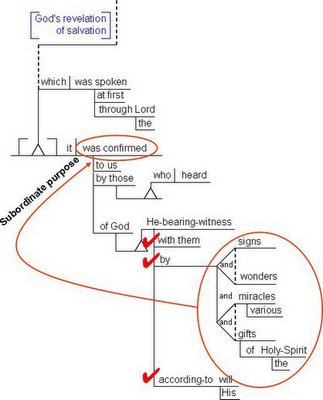 As previously stated, there are many texts which affirm this principle of the subordinate purposes of God’s signs and wonders, but Hebrews 2 is a good start. This premise is key, for it helps us to understand God’s purposes in using signs and wonders. What the author does for us here is to underscore the sufficiency of God’s message of salvation: God has sufficiently revealed Himself and He has sufficiently confirmed His revelation to all. What is clearly seen in the diagram above is the grammatical subordination of the signs, wonders, miracles and gifts of the Holy Spirit. Such signs and wonders were uniquely given by God as the instrumental means to confirm His spoken Word. This important point will be a central guide to our continued discussion: God’s Word is sufficient. It is sufficient in all that it supplies concerning the knowledge which leads to salvation in Christ. It is sufficient in its authority, for there is no greater authority on earth than God’s own special revelation. It is sufficient in that it has already been confirmed by God Himself who served as a witness to His own message and messengers. Thus, when discussing the subject of God’s signs and wonders we must remember that if we miss the important message concerning the sufficiency of God’s Word – then we have missed too much, and may fall into the trap of seeking to exalt the Lord’s signs and wonders over the revelation of His Word.

The next post will continue this discussion concerning the sufficiency of God’s Word; this part of the series will constitute several posts. In fact, there is much more that needs to be said concerning the tense of our primary verb “confirmed” in the text above, but that will be reserved for next time.