Seeing His Invisible Attributes in the Visible World

Posted on September 6, 2006 by miykaeljb

David Kjos, of The Thirsty Theologian fame, recently asked a question on behalf of his son (or, that is, his friend’s son) about some real life applications to the following three concepts in math:

As I began to consider some possible answers to this question, I couldn’t help but to expand this a bit for the sake of my own family, and just for the joy of meditating on the Lord’s creation overall.  Let me offer the following physical applications as illustrations of God’s wisdom and glory in Creation:

1.  Negative Exponents:  Let me offer a contrast first – In cosmology, positive exponents help us to avoid speaking of stellar distances in terms of septillion, sextillion, quintillion, quadrillion miles etc.  It is much easier to refer to a quasar that is 13 billion light years away (or 13 Sextillion miles, or 13 X 10[exp21]).  At the other end of the scale, negative exponents make the description of the atomic 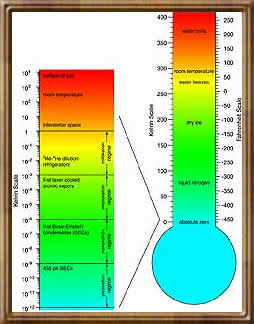 scale much easier – and the study of quantum mechanics depends a great deal on this.  Take for example the zeroth law of thermodynamics.  The zeroth law suppositions that a substance cannot reach absolute zero (at the quantum level) because this would require the absolute cessation of all kinetic energy within a substance.  Because of this we could say that a substance could only approach 0 Kelvin asymptotically (becoming very small, but never reaching zero at the quantum level).  When dealing with asymptotes, negative exponents are very important.  I believe that the lowest recorded temp established at MIT is 500 picokelvin or 10[exp-12] Kelvin.  Now consider this:  In Christ all things consist or “hold together.”  Men may be able to slow such processes down, but they cannot terminate what is perpetually sustained by the Creator:  Colossians 1:16-17: 16 For by Him all things were created, both in the heavens and on earth, visible and invisible, whether thrones or dominions or rulers or authorities—all things have been created through Him and for Him. 17 He is before all things, and in Him all things hold together.

2.  0 Exponents:   I’m no astrophysicist, but I do know that there is a beautiful application (experimentally speaking) concerning a zero exponent.  An exponent of zero means that you have the situation where a numerator is divided by a denominator of identical value such that the exponents (of equal value) resolve to zero.  So what?!  Well, take the question concerning the shape of the universe.  The grand question for some time has been – will the universe hyper-accelerate in its expansion, or will it collapse upon itself.  The third option is that it will continue on in a “flat” or steady state.  This question is regulated by a factor called Omega which is a ratio of the average density of the universe divided by the critical energy density.  If the Omega ratio is much greater than one, then the universe will begin to collapse upon itself; if the Omega ratio is much less than one, then the universe will hyper-expand unto…the Lord’s return (of course, we know how the Universe will end, but I digress…).  But at Omega = 1 (r/rc, where r = rc), the universe will continue in its favourable state of steady expansion.

In exponential terms, Omega’s exponent is either equal to zero or very close to zero – which is baffling to scientists.  A number of scientists have tried to measure (based upon the premise of the big bang) how the universe could possibly be in such a steady state.  Some have suppositioned that the degree of accuracy required in the initial r/rc ratio at the supposed “big bang” would have to be (at 1 ns after the big bang) set to an accuracy of 1 part in 10[exp59] in order to sustain the present factor of Omega.  Figures such as these have led some scientists to begin to use the term “anthropic principle” in order to describe the unimaginable precision in which our universe has “evolved” in order to sustain life. 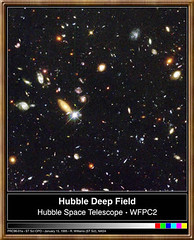 stars also. 17 God placed them in the expanse of the heavens to give light on the earth, 18 and to govern the day and the night, and to separate the light from the darkness; and God saw that it was good.

3.  Absolute value:  As you know, an absolute value strips a number of any coordinate direction – it is simply asking the question “how far have we travelled from zero?”  Let me broaden this concept by bringing up the subject of vector and magnitude.  A vector possesses both magnitude and direction.  The magnitude of a vector (in a sense) would correspond to the idea of absolute value – it only answers the question of “how far” rather than “where.”  In cosmology, we often refer to stellar objects in terms of the absolute value of their distance.  In a sense, Earth is the zero point, and (for example) Alpha Centauri is 4.3 light years away from earth.  In this statement, there is nothing said in terms of the coordinate directions of Alpha Centauri (from the earth) – all that is offered is the magnitude (distance) of the star from Earth.  Such considerations of stellar magnitude have their Scriptural application as well – Isaiah 55:9: 9 “For as the heavens are higher than the earth, So are My ways higher than your ways And My thoughts than your thoughts.”

Romans 1:20: 20 For since the creation of the world His invisible attributes, His eternal power and divine nature, have been clearly seen…