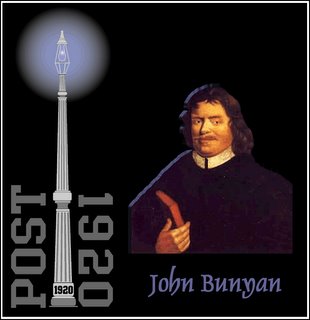 John Bunyan faced a great deal of opposition as a non-conformist preacher in 17th century England. His forthright opposition to the dead, organized church of his day afforded him no favor with the church of England; and his refusal to cease from preaching the Gospel of Jesus Christ earned him 12 years of imprisonment in the Bedford County jail. It was during his imprisonment that he wrote the Pilgrim’s Progress (Complete Title: The Pilgrim’s Progress – From This World to That Which is to Come; Delivered under the Similitude of a Dream). Bunyan clearly understood the religious snares of the world, as he himself had suffered greatly under the hands of men who feigned servitude to Christ. For Bunyan, this was one of the greatest dangers that existed for the true church in his day: the unbelieving tares that were planted by the enemy in the Master’s own fields of wheat. In many ways, Bunyan’s world was much like our own – it was essentially a post-Christian culture that was buried in man-centered religion, offering very little light from God’s Word. Bunyan frequently addressed such problems in his works, and this is especially evident in Pilgrim’s Progress. Throughout this rich allegory, Bunyan unveiled the dangers of hidden apostasy. In fact, it is the main character in the story (Christian) who continually meets men who appear to be committed to the narrow way, but eventually drift away through their own lusts 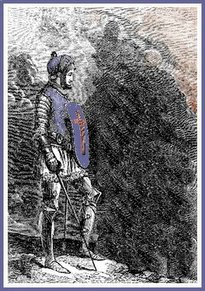 and lack of love for the Lord Himself. Every such encounter of Christian’s is a profitable learning experience and reminder to us all: we all will meet many people who claim to be followers of the Good Shepherd, but who refuse to heed His gracious call. In one such case, Pilgrim was approaching the Valley of the Shadow of Death when he met two men along the pathway:

I saw then in my dream, that when Christian was approaching the borders of the Shadow of Death, there he met two men who were the children of those who brought up an evil report of the good land Num.13:32 – these men beckoned Christian to go back…

Chr. Where are you going?

Men. They said, Back, back; and we would have you do so too, if either life or peace is prized by you.

Men. Matter! said they; we were going that way as you are going, and went as far as we dared: and indeed we were almost past coming back; for had we gone a little further, we would not have been here to bring the news to thee.

Chr. But what have you met with? said Christian.

Men. Why, we were almost in the Valley of the Shadow of Death, but by good fortune we happened to look before us, and saw the danger before we came to it.

These men “beckoned Christian to go back” – back to where? All that was behind them was the City of Destruction, from which they all came. Bunyan described these two defectors of the Way as being the children of those who brought up an evil report of the good land. By this reference, we are instantly immersed into that dark picture of those corrupt witnesses who lied to the people about the inhabitants of Canaan in order to instill fear in them and thus encourage a retreat. Those men received their just due (Numbers 14:36-38), as did all of the people who grumbled against the Lord that day:

Numbers 14:1-4: That night all the people of the community raised their voices and wept aloud. 2 All the Israelites grumbled against Moses and Aaron, and the whole assembly said to them, “If only we had died in Egypt! Or in this desert! 3 Why is the LORD bringing us to this land only to let us fall by the sword? Our wives and children will be taken as plunder. Wouldn’t it be better for us to go back to Egypt?” 4 And they said to each other, “We should choose a leader and go back to Egypt.”

God’s judgment against that generation became an example and a warning for anyone who would ever lay claim to being a disciple and follower of the Lord (Hebrews 3:12-4:3a, 1 Corinthians 10:1-14). What was most grievous about the defection of these complainers in Numbers 14 is that they had forsaken the clear promise of God, which was the sure anchor for their souls (Hebrews 6:13-19):

Numbers 13:2: “Send out for yourself men so that they may spy out the land of Canaan, which I am going to give to the sons of Israel.”

Instead of trusting the Lord and His promises, many of the nation of Israel complained and were judged; and like the these faithless Jews who were planted alongside the pure wheat of God’s remnant, the two defectors in the Pilgrim’s highway had only the appearance of being in the narrow way; however, their fear of affliction, and love for their former habitation, outweighed any desire for the Precious Cornerstone who was to be found in the Celestial City. It is no wonder that Bunyan arranges his story so that the path to the Celestial City went directly through the Valley of the Shadow of Death, for this is the manner in which God purifies His church and strengthens His people:

Acts 14:22 “Through many tribulations we must enter the kingdom of God.”

1 John 2:19 They went out from us, but they were not really of us; for if they had been of us, they would have remained with us; but they went out, in order that it might be shown that they all are not of us.

Bunyan’s warning about the reality of hidden apostasy is the same warning given to us by the Apostle John. As well, it also echoes the truth of Acts 14:22, that the children of God must go through; not around, but through many tribulations to the kingdom of God. This is the Lord’s loving pedagogy that He supplies for His children, for He disciplines us for our good (Hebrews 12:4-6). This is also the way in which the Lord makes evident those who are His versus those who only appear to be in the Pilgrim’s highway. By these truths, we are reminded that the trials of life serve the precious and loving purposes of our sovereign Lord. Like Christian, we must have our sword drawn at all times, being armed with His wisdom, and ready in the strength of His might, for whatever lies ahead. This we must do as we trust His promise, that by His sovereign grace alone He will bring His Pilgrims home.