One Nation Under Feminism

Posted on September 1, 2008 by miykaeljb 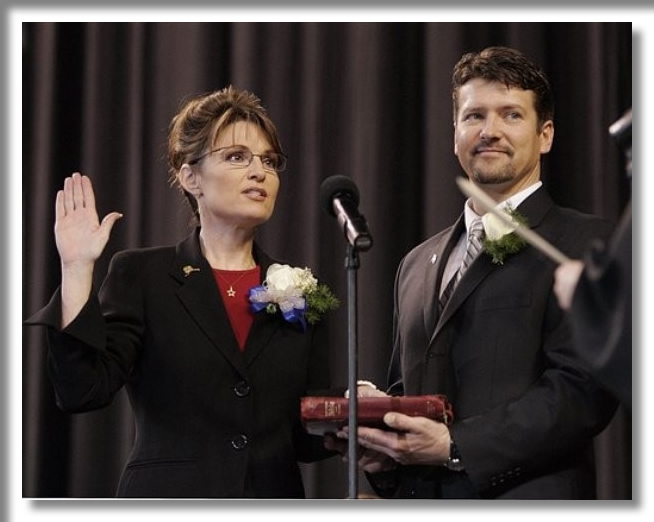 11 Woe to the wicked! It will go badly with him,

For what he deserves will be done to him.

Their oppressors are children,

And women rule over them.

O My people! Those who guide you lead you astray

and confuse the direction of your paths.

Some time ago I changed my voter registration to that of Independent as I came to realize that the Republican party no longer represented me very much at all.  Since then I have become more and more convinced of the importance of such a choice.  I certainly don’t mention this in order to sway others to do the same – I only mention it here in order to point out my growing vehemence towards the shallow politics of our nation.  My differences with both the Republican and Democratic parties are not principally found in the matters of taxation, fiscal discipline, or even energy policy; my profound differences are found in the matters pertaining to “family values” – something that has been reduced to a meaningless campaign slogan, used only for political expediency in too many cases.  The way in which our family values have been systematically destroyed in our nation are as follows:

As to this final problem, most Republicans will pridefully deny any wrong-doing, while pointing out the opposing party’s devotion to a woman’s “freedom of choice” (i.e. the right to murder unborn children).  While I can agree that the Democratic party has excelled in this matter of devaluing the rights of children, I must also remind Republicans that they have no right to cast the first stone.  If anything, there is a more insidious denigration of children among Republicans these days, and it has to do with their exceeding devotion to feminism.  Many who would term themselves as “conservatives” these days, show themselves to be quite liberal when it comes to the biblical definitions of fatherhood and motherhood.  If anything, through the advancement of feminism (which has resulted in the systematic destruction of motherhood), the children of our nation are being being abandoned as virtual orphans.  Left to themselves, their classmates, teachers, televisions, video games, and ipods, the children of this generation are being raised within a cesspool of materialism, selfishness, and familial anarchy.  Even those trace elements of “motherhood” found within our culture are still being systematically crushed beneath the well lubricated machine of political correctness and identity politics.  Consider the following clip from ABC News:

Why is it that male politicians have not been questioned about “who is taking care of the children” at home?  Because this nation, which once held to a form of Judeo-Christian values, understood that men were to lead and provide for their homes, while mothers nurtured and cared for their children.  In other words, there once was a day when fatherhood and motherhood meant much more than sexual reproduction.  Sadly, many conservatives have excelled in this degradation – in some ways transcending the efforts of contemporary liberals.  Our most recent illustration of this point has been seen in John McCain’s appointment of Sarah Palin, the Governor of Alaska.  We are supposed to believe that appointing a woman to this office is a good thing.  After all, the glass ceiling that kept mothers in their home, and out of the public workplace, is being utterly shattered by feminists like Geraldine Ferraro, Hillary Clinton, and…Sarah Palin:

Sarah Palin:  “I think — I think as well today of two other women who came before me in national elections.  I can’t begin this great effort without honoring the achievements of Geraldine Ferraro in 1984…(APPLAUSE)… and of course Senator Hillary Clinton, who showed such determination and grace in her presidential campaign. (APPLAUSE)  It was rightly noted in Denver this week that Hillary left 18 million cracks in the highest, hardest glass ceiling in America…(APPLAUSE)… but it turns out the women of America aren’t finished yet and we can shatter that glass ceiling once and for all.”

Like many other feminists of our day, Palin has broken through the glass barrier of motherhood indeed, and with a vengeance.  Having served two terms as Mayor (Wasilla), and now as the governor of Alaska – she has certainly proven to us all that women can break free from the shackles of motherhood.  Unfortunately, what she has also proven is that mothers who forsake the importance of nurturing children in the home often reveal the dark consequences of their choices.  Sadly, it has been reported today that her unmarried 17 year old daughter, Bristol, is pregnant.  I would add to this unfortunate news the fact that Sarah Palin made a questionable gamble when her fifth child was born in April of this year.  At 8 months into her pregnancy, she began to leak amniotic fluid; and yet despite this she proceeded to give a speech thirty minutes later at a Texas energy symposium.  Afterwards, rather than checking into a hospital for her soon to be born Downs Syndrome child, she proceeded to take an 8 hour commercial flight back to Alaska, despite the obvious risks associated with such a choice.  While we still know very little about Sarah Palin, what is known about her choices as a mother is quite troubling. However, we must remember that children are not obstacles to a greater agenda; they are precious gifts (Psalm 127) who require the loving guardianship of a father who will lead in the home, and the caring nurture of a mother who is most eager to devote time to her family.

Let me say that for some of you who care more about a better energy policy, or lower gas prices, just remember this: there are things that are much more important, such as God’s institution of marriage and family; the value of human life; and the importance of nurturing children who are called precious gifts from God Himself.   If you feel a competition between these matters, then you ought to consider whether or not you too have fallen into the trap of materialism and pragmatism.  We all have a need to guard the higher priorities against the onslaught of the lesser.

Finally, lest anyone might seek to confound my overall point in this post, remember that the greater culpability in this story is found, not with Sarah or Bristol Palin, but with the one whom God has ordained to manage the Palin household – Mr. Todd Palin (Genesis 18:19, Eph. 5:22-33, 1 Peter 3:7).  I tremble at the thought that our nation may very well deserve the consequences of the actions and inactions of this “First Dude” of Alaska, thereby leaving us all the more as one nation under feminism (Is. 3:10).

Update:  Here is an interesting interview with Voddie Baucham concerning the matter of Palin’s nomination.  Be sure to advance to 1:00 in the video – the interview doesn’t begin until then.