Interpreting the Message of Homosexuality, Part I

Therefore be careful how you walk, not as unwise men…American culture has been undergoing a spiritual and moral downgrade over the last 35 years that has been nothing less than a dramatic free-fall into the pit. The rapidity of this downgrade has been shocking, and the fruit that it has yielded is of such a rotten nature that it all eerily resembles those ancient “civilizations” like Sodom and Gomorrah. Contrary to the ideals of some of our better American forefathers, the new deity in our land is not the God of Holy Writ, but it is our freedom to do whatever makes us happy. It is this diety of human freedom that many Americans serve and adore today. Sadly, the illustrations of this truth are too numerous to count. We could certainly make the attempt of going through a specific list of America’s symptomatic problems, but I believe that we only need to look at a few plain indicators of societal corruption; but first, we’ll look at God’s Word in order to calibrate our thinking about our culture:

2 Timothy 3:1-4: 1 But realize this, that in the last days difficult times will come. 2 For men will be lovers of self, lovers of money, boastful, arrogant, revilers, disobedient to parents, ungrateful, unholy, 3 unloving, irreconcilable, malicious gossips, without self-control, brutal, haters of good, 4 treacherous, reckless, conceited, lovers of pleasure rather than lovers of God…

Romans 1:24-27: 24 Therefore God gave them over in the lusts of their hearts to impurity, so that their bodies would be dishonored among them. 25 For they exchanged the truth of God for a lie, and worshiped and served the creature rather than the Creator, who is blessed forever. Amen. 26 For this reason God gave them over to degrading passions; for their women exchanged the natural function for that which is unnatural, 27 and in the same way also the men abandoned the natural function of the woman and burned in their desire toward one another, men with men committing indecent acts and receiving in their own persons the due penalty of their error.

Both of these passages are significant because they tell us what depraved and abandoned societies look like. In many respects, the specific manifestations of human depravity are like road signs which tell us a great deal about the spiritual reality behind it all. Like a thermometer on a wall, if you want to know the temperature of the room that you are in, just read the thermometer. Sin in the culture is like that thermometer – if you want to know the spiritual temperature of your world, then just take a gander at what is going on in the culture around you. 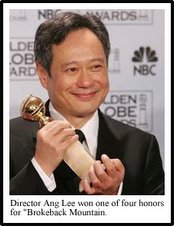 On this note, we observe that Hollywood continues to be one of the leaders in the parade of self love and self exaltation. Just yesterday, the Golden Globe Awards led that parade by championing a series of recent movies which glorify homosexuality and vilify heterosexuality. Just a cursory examination of the top winners for the night reminds us all that the powerful leaders in Hollywood have an agenda, and it is of the spirit which is anti-Christ:

It was a triumphant night for films dealing with homosexuality and transsexuality. Along with the victories for “Brokeback Mountain,” acting honors went to Felicity Huffman in a gender-bending role as a man preparing for sex-change surgery in “Transamerica” and Philip Seymour Hoffman as gay author Truman Capote in “Capote.” [By Todd Leopold CNN Tuesday, January 17, 2006; Posted: 12:33 p.m]

The awards ceremony itself bore a stark resemblance to the gay pride parades that we often hear about (whether we want to or not) where some of the most extreme forms of sexual perversion are paraded about as if they were something to celebrate (Isaiah 5:18-20). But of course, all this is in keeping with the principle of self love, self worship and self exaltation. Hollywood’s praise of sexual perversion is a plain indication that its leaders delight in heralding some of the most debauched manifestations of sin possible.

Having said this, we must all remember that all men have sinned and fall short of the glory of God (Romans 3:23) – and that any standard that is against the truth of God is worthy of eternal judgment. Failure to recognize this is dangerous and could lead to too great a focus on particular sins rather than mankind’s natural condition of sin. This said, it is still significant to understand that the sin of homosexuality is presented in Scripture as being one of the plainest indicators of a society that has been given over to extreme corruption and abandonment [Romans 1]. Yes, all sin is sinful, and worthy of condemnation, however when a society becomes dominated by effeminate men and homosexuals; or when sexual perversion and self love is exalted as being some of the highest forms of human virtues, then you know that God is giving them over to their own selfishness and self-exaltation. Thus, cultures that are effeminate and perverse in this manner are those that are heavily populated with men who have abandoned their role as leader and protector of the family; it is also a place where women have resisted their role as a helper and worker in the home by means of nurturing a family for the glory of God. It is in this sense that America has been made 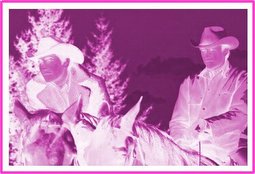 pink with effeminate and perverse men who have forsaken their calling before Almighty God, and this sensitive issue will only continue to become more controversial in American culture, especially if the “hate crimes” definitions continue to be advanced after the pattern of recent history.

Men abandoned the natural function of the woman and burned in their desire toward one another…These issues are important for many reasons, to include our view of sin and our privilege of evangelism. I will cover these important matters in a few posts to be submitted in the future; but for now, this moment in history is worth looking at in order to identify it for what it is: it is yet another plain indication of our nation’s spiritual and moral downgrade. It is a reminder to us all that while many people may never claim to be religious, a good deal of them do worship the “god” of personal liberty, selfishness and self exaltation. The credo of this religion is well rehearsed in our society: “…we must all endeavor be true to ourselves.” In other words, whatever we want, desire or fantasize over must be our pursuit in life, lest we be guilty of hypocrisy. It was this same credo that was advanced last night by Felicity Huffman who won the best drama actress award for “Transamerica”:

“I know as actors our job is usually to shed our skins, but I think as people our job is to become who we really are and so I would like to salute the men and women who brave ostracism, alienation and a life lived on the margins to become who they really are.”

Here is the modern mantra of our world: to become more of what we really are. The problem is that what we really are is detestable in the sight of God. Mankind is not called to become more of what he already is, but to be transformed through a new life that is only found in the Lord Jesus Christ; that we may be covered in His righteousness through faith in Him; and that we may be conformed to His image through His sovereign and sufficient grace working in our lives. By this work of His, we will become less of what we are and become more like Him. This is our message to the world, even though the world parades its wickedness in a proud display of defiance against the very God who mercifully preserves their lives on a day to day basis. But we must see the parade for what it is and respond with the powerful message of the Gospel of Jesus Christ, all the while being careful concerning our own walk in this fallen world:

Ephesians 5:15-16: 15 Therefore be careful how you walk, not as unwise men, but as wise,16 making the most of your time, because the days are evil.

In the posts that will follow this one, I will discuss (as already mentioned) the way in which this discussion relates to our view of sin and our privilege of evangelism. This is crucial, I believe, especially since a degrading culture can affect and influence our view of sin, and even our evangelism with others, to a detriment. We therefore have a great need to be vigilant and ready to do the Lord’s bidding and not our own. May God grant us the grace to do so, and may He be at work in the hearts of men and women such that they may be drawn to the Savior for His glory.

5 Responses to Interpreting the Message of Homosexuality, Part I