I Don’t Have Enough Faith to be a Pluralist

Being popular in our modern and shallow culture isn’t necessarily a compliment.  Actually, in any generation, friendship with this world is counted as enmity with God (James 4:4).  We see the shallowness of public fame whenever people mention men like Joel Osteen.  Should you dare question the man’s teaching by one iota, his devotees will quip canonically: “…but he’s so popular!”   Similarly, Rick Warren’s popularity affords him the unspoken right to teach just about anything.  His willingness to ride on the pluralism train is accepted without a wince in the interview below.  The video clip was originally posted by hotair.com as an example of Warren’s comments against Atheism: “I don’t have enough faith to be an Atheist.”  That’s a good statement – it is loaded with much truth, by itself; however, he apparently has enough faith to be a pluralist:

Exit question – would we expect the prophet Elijah to attend a worship ceremony populated with Baal worshippers?

After which time he confronted the idolaters with a verbal blast that would cause genteel ecumenists like Osteen and Warren to blush pink:

1 Kings 18:27: It came about at noon, that Elijah mocked them and said, “Call out with a loud voice, for he is a god; either he is occupied or gone aside, or is on a journey, or perhaps he is asleep and needs to be awakened.”

Might I suggest that the NASB translators are being too polite in the above text.  When Elijah said “…either he is occupied or gone aside…” it doesn’t exactly reveal the intensity of Elijah’s mockery.  The verbs employed by Elijah rhyme quite well, and connote a symmetry of thought: siych…siyg. 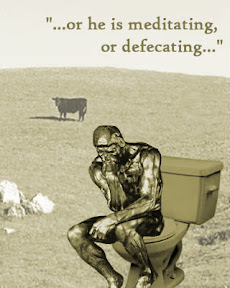 Siych speaks of heavy contemplation, and siyg speaks of a person undergoing a bowel movement (The Dictionary of Biblical Languages with Semantic Domains).  If you take Auguste Rodin’s sculpture “The Thinker” and put him on a toilet – then you’ve approximated, in picture form, Elijah’s rebuke of their idolatry.  Clearly, Elijah was no ecumenist, nor pluralist; he was a prophet of God who was filled with a holy indignation against the idolatry of Baal.

Who knows, perhaps Warren is preparing for such a public renunciation of Allah at his next Ramadan gathering – although, I’d rather doubt it.  After renaming Jesus as “Isa” at our President’s inauguration, we are left with little grounds for a better hope.  If you think that using the Koran’s name of “Isa” for Jesus isn’t a problem, then just remember this: according to the Koran, Jesus was not the Son of God, nor was He ever crucified.  Why would we desire to render indifference to such heresy as this, any more than we might with, say…. Mormons or Jehovah Witnesses?

Below are some other posts dealing with the dangers of ecumenism and pluralism in our world today:

An Open Response to an Open Letter

The Hall of Shame @ The Armoury