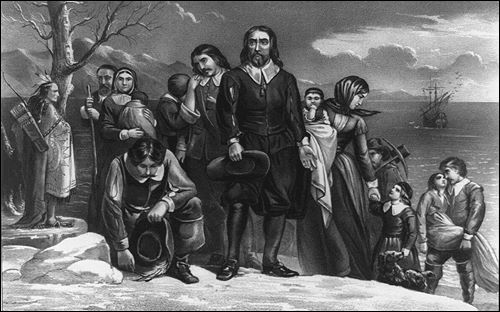 The modern mind may think of several things when remembering Thanksgiving Day, but how many would consider this to be a time of serious contemplation and even…humility?  For those who would dare to examine the beginnings of our Thanksgiving Day holiday, they would find that prayer and humiliation formulated the basis of and necessary prelude to this day of joy and celebration.  Frankly speaking, one cannot find the latter lest they seek the former.

History reminds us of this truth, especially when we consider the writings of Mr. William Bradford who served as the governor of Plymouth Plantation almost continuously from 1621 to 1656 (except for five of years of this period).  His description of the early pilgrims, their devotion to God, and their endurance through suffering, helps us to comprehend better the significance of what we now refer to as Thanksgiving Day.  Before their own day of thanksgiving came about there was an even greater event which

preceded it. In Bradford’s record below we learn of the hardships that visited Plymouth, even after new supplies and passengers arrived on the ship called the Anne:

"These passengers, when they saw their low and poor condition ashore, were much daunted and dismayed, and according to their divers humors were diversely affected. Some wished themselves in England again; others fell a-weeping, fancying their own misery in what they saw now in others; other some pitying the distress they saw their friends had been long in, and still were under. In a word, all were full of sadness. Only some of their old friends rejoiced to see them, and that it was no worse with them, for they could not expect it should be better, and now hoped they should enjoy better days together. And truly it was no marvel they should be thus affected, for they were in a very low condition; many were ragged in apparel and some little better than half naked, though some that were well stored before were well enough in this regard. But for food they were all alike, save some that had got a few peas off the ship that was last here. The best dish they could present their friends with was a lobster or a piece of fish without bread or anything else but a cup of fair spring water. And the long continuance of this diet, and their labours abroad, had something abated the freshness of their former complexion; but God gave them health and strength in a good measure, and showed them by experience the truth of that word, (Deuteronomy 8:3) ‘That man liveth not by bread only, but by every word that proceedeth out of the mouth of the Lord doth a man live.’"

"When I think how sadly the Scriptures speaks of the famine in Jacob’s time, when he said to his sons, ‘God buy us food, that we may live and not die,’ (Genesis xlii.2 and xliii.1) that the famine was great or heavy in the land. And yet they had such great herds and store of cattle of sundry kinds, which, besides flesh, must needs produce other food as milk, butter and cheese, etc. And yet it was counted a sore affliction. Theirs here must needs be very great, therefore, who not only wanted the staff of bread but all these things, and had no Egypt to go to. But God fed them out of the sea for the most part, so wonderful is His providence over His in all ages; for His mercy endureth forever."

"I may not here omit how, notwithstand all their great pains and industry, and the great hopes of a large crop, the Lord seemed to blast, and take away the same, and to threaten further and more sore famine unto them. By a great drought which continued from the third week in May, till about the middle of July, without any rain and with great heat for the most part, insomuch as the corn began to wither away though it was set with fish, the moisture whereof helped it much. Yet at length it began to languish sore, and some of the drier grounds were parched like withered hay, part whereof was never recovered. Upon which they set apart a solemn day of humiliation, to seek the Lord by humble and fervent prayer, in this great distress. And He was pleased to give them a gracious and speedy answer, both to their own and the Indians’ admiration that lived amongst them. For all the morning, and greatest part of the day, it was clear weather and very hot, and not a cloud or any sign of rain to be seen; yet toward evening it began to overcast, and shortly after to rain with such sweet and gentle showers as gave them cause of rejoicing and blessing God. It came without either wind or thunder or any violence, and by degrees in that abundance was that the earth was thoroughly we and soaked and therewith. Which did so apparently revive and quicken the decayed corn and other fruits, as was wonderful to see, and made the Indians astonished to behold. And afterwards the Lord sent them such seasonable showers, with interchange of fair warm weather as, through His blessing, caused a fruitful and liberal harvest, to their no small comfort and rejoicing. For which mercy, in time convenient, they also set apart a day of thanksgiving."

[Note: "…A law of 15 Nov. 1636 (Plymouth Colony Records XI 18) allows the Governor and Assistants ‘to command solemn days of humiliation by fasting, etc., and also for thanksgiving as occasion shall be offered.’"]. Excerpt of William Bradford – Of Plymouth Plantation [1620-1647] by William Bradford, edited by Samuel Eliot Morison.

What I love about this excerpt is that the institution of their thanksgiving celebration came some time after a day of prayer and humiliation. Here is a great lesson for us all: Genuine thankfulness can only grow and flourish in a heart that has been softened and prepared by humility (Philippians 2:1-14; 1 Cor 4:7). In view of the truth of God’s word, and in view of the historic example of these godly brethren, let us all seek the Lord prayerfully, with humility, and with thanksgiving!