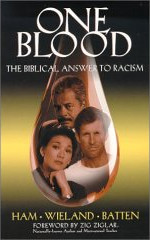 “If anyone wishes to know where the tadpole of Darwinism was hatched, we could point him to the pew of the old chapel in High Street, Shrewsbury, where Mr. Darwin, his father, and we believe his father’s father, received their religious training.” [The Sword and the Trowel, The Downgrade, April 1887].

The legacy of evolutionary theory has been around for more than a century, and its destructive influence has continued to make advances, not only in the culture at large, but even in the church. If there is a change at all, from Spurgeon’s day to the present, then it might be found in the way in which the church perceives and approaches this contest between evolutionism and creationism. In fact, in many ways, the modern church has capitulated to many of the tenants of evolutionary theory without even comprehending that it has done so – and this needs to change. It is this very issue that is addressed in One Blood, The Biblical Answer to Racism, co-authored by Ken Ham, Dr. Carl Wieland & Dr. Don Batten. Their approach to this subject is quite simple: Racism is an invalid ideology because there is no such thing as multiple races. Instead, there is just one race and it is called the human race. Thier assessment of this matter is fully developed in the book, but I would simply add here that the English word itself is often misused and misunderstood in the common culture. According to the Oxford English Dictionary (full edition), the term race refers to “A group of persons, animals, or plants, connected by common descent or origin.” Based upon that definition alone, it is better to assert that there is in fact just one race since we all have our “common descent or origin” from one man – Adam. The principle text that guides One Blood is found in Acts 17 where the Apostle Paul preached the Gospel in Athens:

Acts 17:24-26: 24“God, who made the world and everything in it, since He is Lord of heaven and earth, does not dwell in temples made with hands. 25“Nor is He worshiped with men’s hands, as though He needed anything, since He gives to all life, breath, and all things. 26“And He has made from one blood every nation of men to dwell on all the face of the earth, and has determined their preappointed times and the boundaries of their dwellings…”

The Lord made from one blood, every nation of mankind to live on all the face of the earth. Clearly, verse 26 is the focal text of One Blood. Throughout this work, their approach is overtly biblical. Thus, every aspect of science, history, archeology, and biology is understood in view of the biblical record – not the other way around. Thier commitment to inerrancy is therefore refreshing, especially in a world of integrationist “scholars” whose design is to subject the Bible to what they see as modern “science.” But this is not the approach of Ham, Wieland & Batten. One Blood clearly shows that modern day racism has been fueled by Darwinian philosophy. When people in the modern day speak of racism, they are typically referring to the distinction of skin color, however One Blood clearly demonstrates that skin color is a useless and unbiblical distinction. It shows that skin color is simply a variation of the primitive skin pigmentation called melanin; in other words, the typical categories of skin color (white, black, brown or yellow) are just variations of this one skin pigmentation – melanin. They go on to point out that skin color is a very minor distinction between humans, since there is more He has made from one blood every nation of mengenetic variation between humans based upon eye color than there is between skin color!

Overall, I consider this to be a very solid and helpful work. It is also a work which challenges us to consider how we think of other people, and how we might reach out to them with the Gospel. I can tell you right now that if someone ever brings up the subject of racism – it is a wonderful Gospel opportunity (it certainly was an opportunity for the Apostle Paul with the proud and arrogant Athenians who were convinced of their own supremacy over the rest of mankind). Rather than talking to others about racism, feel free to speak to them about the oneness of the human race – how it is that we were made from one blood – the blood of the first Adam. This then presents the important opportunity to tell them about the shed blood of the last Adam, the Lord Jesus Christ!

Starting with this review, I will begin the process of offering some book and DVD reviews in the future. I will try to focus on Biblical commentaries, theologies and scientific works in an attempt to offer some small contribution to the already ample supply of book reviews today.

One final comment on this concept of race (for those who are wondering): Most English translations contain a hanful of references which contain the word “race.” They do this in an attempt to convey the idea of a distinct genealogy. There are only a few occurrences of this word, but consider the example in Mark 7:26 which refers to the woman who was of the Syrophoenician “race” (genous). I believe that the translators’ better choice would be genealogy or descent (see Revelation 22:16). Lexically speaking, the English word “race” is far too broad in concept, and is therefore potentially confusing, especially in our current day