Barack Obama and “Your Messianic Rumor of the Day” 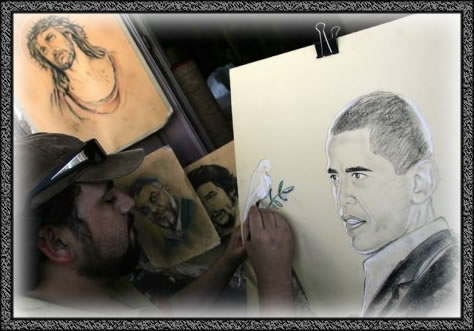 Whenever I read the book of Revelation, particularly chapter 13, I am struck at how the Anti-Christ will receive worldwide worship and adoration (Revelation 13:3), while presenting himself in religious themes so numerous that Bill Maher couldn’t possibly hope to criticize them all in just one lifetime.  It boggles the mind when we consider it, but how could the broad majority of the world seek to back and support a single world leader, while gladly placing themselves beneath a one-world economy?  It was always apparent to me that, for the latter condition, all that is needed is a global-economic crisis that would bring the world to a state of desperation and need.  To this condition I think we can all attest that our present circumstances clearly illustrate how such a prophecy could be fulfilled – and maybe very soon.  But what about the former condition?  How can a world of such epistemological, philosophical, religious, and ethnic diversity seek to serve a single world ruler?  Well, once again, our present circumstances clearly illustrate how such a prophecy could be fulfilled.  This world’s adulation for our new president gives us, I believe, a preview of how the prophecy of Revelation chapter 13 could be fulfilled.  Even within the Muslim world our present leader of “The Great Satan” (the United States) is being considered for the top position in the Islamic-eschatological hierarchy:

Ali Ibn Abi-Talib—the prophet’s cousin and son-in-law and the most revered figure in Shiite Islam—prophesied that before the return of the Mahdi, the ultimate redeemer in Islam, a tall black man will rule the West and will carry a “clear sign” from the Third Imam,Hussein Ibn Ali, according to the report by Iranian-born, London-based journalist Amir Taheri.

Forbes magazine published a story about the Iranian pro-government website that published a hadith (saying or tradition) from the 17th century Shiite text Bahar al-Anvar (Sea of Light) setting off a string of rumors about the prophecy’s connection to Obama.

The link between this black man and the American presidential candidate started with his name. In Arabic and Persian, “Barrack Obama” means “the blessing of al-Hussein.” When written in Persian alphabet, the word “O Ba Ma” means “he is with us.”   Al Arabiya News Channel [Prophecy Circulated on Iranian Website].

We will have to wait and see if this particular rumor within the Islamic world will survive or not.  To be clear, the above article was written in order to denounce the said rumor (Shiite scholar denies Obama link to Muslim Savior), but the fact that this has had any grassroots support within the Muslim world is indeed remarkable and quite fascinating.  One thing we can say for certain – the world is being prepared for what the Scriptures refer to as “the last days.”  May the Lord increase our witness for Christ while it is still day, because the night is coming (John 9:4).