This is an Emergency 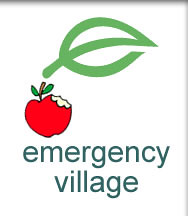 Though I feel that I am borrowing time in order to make this post, I believe that it is important enough to do so. I feel as though I can at least squeak out a few minutes of time in order to write out some thoughts about the recent verbal wrestling that has been going on concerning the EC movement.

Or should I call it the emerging ex-emergent movement of the post-emergent generation?

For myself, I look at it all as a spiritually dangerous emergency.

Sadly, at the center of the Emergent Church movement are some rather disturbing doctrines that are being swirled about. For many within the EC movement, the doctrines of justification by faith, the atonement of Christ, the virgin birth and eternal hell are now open for discussion, debate and even denial. The unofficial leaders of the movement are doing precious little to stem this tide of doctrinal error, and why should they? After all, Brian McLaren cannot deny universalism nor is he sure that homosexuality is a sin; and N.T. Wright offers a version of justification that comports more with the Roman Catholic doctrine of infused righteousness, rather than the Biblical teaching of imputed righteousness. The leaders of the EC movement are not neophites – many of them are well read and highly educated men who have a higher accountability in view of their training and ministry responsibilities.

But as some say, the problem with a bridge is that it facilitates two-way traffic.

What is most unsettling to me is this presumption of influence, along with an apparent denial that there is a doctrinal emergency at hand (emergency, as in 911). A great deal of doctrinal heresy is readily brewing at the center of the Emergent Movement, and there are those who want to engage in …a conversation over this?

Consider this thought for a moment. When the core doctrines of Christianity are under attack it is necessary that we refrain from a genteelism which belies the seriousness of the occasion, thus a quaint conversation isn’t exactly what is called for. For example, the errorists in the church at Philippi probably didn’t like Paul’s “conversation” when he declared to the whole church that “many walk, of whom I often told you, and now tell you even weeping, that they are enemies of the cross of Christ, whose end is destruction.” These errorists, along with their denial of the doctrine of justification by faith (Phil 3:1-16), were met with a weighty response – a response that matched the value of the doctrine in question. Such a confrontation was necessary for the sake of those in error, as well as for those who were inclined to follow them in their error. As well, the Savior Himself delivered stern rebukes for those who had placed themselves in positions of spiritual authority over the people, therefore, to the Scribes and Pharisees who had the law, and should have known better, the Lord publicly identified them (John 10:19) as strangers, thieves, robbers and wolves (John 10:1-14). These were the very religious leaders whom the Lord rebuked in public with a series of prophetic woes in Matthew 23. This is a far cry from the popular views of Christ’s shepherding ministry that many tout today. Sadly, many in the EC movement flounder in the absence of godly rebukes.

The precedent of Christ and the apostles is crucial. Their corrections of error were not fainthearted, nor were they sarcastic and recreational. These were serious minded confrontations of some very serious error. They didn’t gather for chit-chats (or “conversations”) with the false religious leaders of their day. Oh there was dialogue to be sure, but it was that form of dialogue that was entirely couched in proclamation, exhortation, and some very firm rebukes.

You see, when the core tenants of the Gospel are at sake – this is how you have a “conversation.”

Consider the following as an illustration: If I were walking along the street and I saw a family member of mine being beaten mercilessly by someone, I can assure you that I wouldn’t just carry on without a single care. Nor would I want to come up to the person and try to enter into a dialogue. No, I would approach the assailant in order to stop him immediately – we can talk later, if he’s willing to talk. If this seems obvious to you, then why is it that so many today are willing to witness the core doctrines of Christianity being ravaged in public, while these supposed “defenders of the faith” are only interested in having a dialogue. The best that I could hope for is that the absence of reproof for many of the false teachings within the EC movement are the product of spiritual or doctrinal immaturity. At worst, the absence of holy reproof may even be an implicit denial of the very doctrines in question.

As a pastor, I have a great concern for the influence of those who lie at the core of the Emergent “Conversation”, as well as for those who are willing to still be identified with the movement, if even remotely. Now some people would have us to believe that McLaren’s and Wright’s advocacy of error is an opportunity for a “conversation” – I guess I could agree, if by “conversation” one means a godly, public rebuke.

But there is another problem that concerns me as it relates to this discussion, and I’ve not gotten to it yet. This is only a preliminary post that will be followed up by another, where I will speak of the great problem of man-centered loyalty over Christ-centered loyalty. It will be based, in part, on the recent dialogue over at TeamPyro – Why The Emerging Conservation is Going Nowhere.* In that post, the discussion moved from a theology-centered discussion, to a debate that centered on just one man, which I don’t believe was the original intent of the post. All in all, such a transformation of dialogue serves as an illustration; It is this very dynamic of redirecting discussions of doctrine to debates about pastoral personalities that I will have in mind next time. But for now, I leave you with the uncompromising thoughts of Martin Luther:

*Note: Rarely do I make comments on other blogs – I have to be fairly driven to do so. This particular discussion concerned me enough to throw in a few thoughts – and some of those sentiments are repeated here as well in this post.

**Emergency Village – as in Emergent Village.