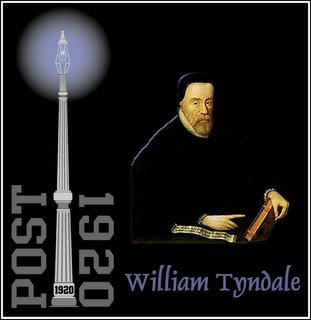 “Lord! Open the king of England’s eyes.”
William Tyndale, A.D. 1536
This prayer of William Tyndale’s may not seem terribly unusual, especially in light of the fact that all Christians are called to pray for their leaders – that is, for kings and those in authority (1 Timothy 2:1-6). However, I can assure you that the above petition is one that is profound, for it reflects the great glory of the Savior in many ways; especially the glory of His suffering and death. As well, it calls to mind that crucial statement given to us by the Apostle Paul when he wrote to the church at Philippi about his own suffering for the sake of the Gospel – consider the following parallel between Paul and Tyndale:
When Paul wrote his epistle to the Philippians, he sought to encourage them, while he himself was imprisoned for preaching the Gospel. Rather than writing to the brethren at Philippi in order to complain about the bad food, the poor living conditions, or even the horrors of being bound in chains, the Apostle instead rejoiced greatly in the Lord’s providential advancement of the Gospel message in Rome – especially as it had advanced to Caesar’s own household (Phil 4:22). We certainly admire Paul’s godliness greatly because he imitated the Savior intensely. You see, Paul wanted to be like Christ not only in his life, but also in his suffering and death. Thus, Paul desired to know Christ in every possible way:

Philippians 3:10 that I may know Him, and the power of His resurrection and the fellowship of His sufferings, being conformed to His death;

His statements here are wonderfully deep and profound. Paul desired to know Christ intimately, which included what it means to bear the cross of Christ in this wretched world. By this we clearly see that Paul comprehended that being a disciple of Christ means facing persecution in a world that is hostile to God’s Word:

2 Timothy 3:12 And indeed, all who desire to live godly in Christ Jesus will be persecuted.

What the Apostle expressed in 2 Timothy 3:12 was not some theoretical concept. Paul had tasted the hostility of men many times over in the face of proclaiming the Gospel; but what he desired amidst such persecution was to be found as one who reflected the godliness of the Savior in His suffering and death: Father, forgive them; for they do not know what they are doing

1 Peter 2:21-24: 21 …Christ also suffered for you, leaving you an example for you to follow in His steps, 22 who committed no sin, nor was any deceit found in His mouth; 23 and while being reviled, He did not revile in return; while suffering, He uttered no threats, but kept entrusting Himself to Him who judges righteously; 24 and He Himself bore our sins in His body on the cross, that we might die to sin and live to righteousness…

Peter’s call to imitate Christ reflects much of what Paul desired. Paul wanted to know the fellowship of Christ’s sufferings; even being conformed to His death. Much of this would include his dying with the dignity that was Christ’s when He gave up His own life on the cross. Christ did not revile those who reviled Him; He uttered no threats, nor was there any deceit found in His mouth. Indeed, Christ went to the cross with a holy disdain for sin, but also with a petition of mercy for sinners:

Luke 23:34 But Jesus was saying, “Father, forgive them; for they do not know what they are doing.”

Comparatively, Stephen came to know the fellowship of Christ’s sufferings, and was himself conformed to the likeness of the Savior’s death:

Acts 7:60 And falling on his knees, he [Stephen] cried out with a loud voice, “Lord, do not hold this sin against them!” And having said this, he fell asleep.

My mention of Stephen here is somewhat ironic, since Paul (who was known as Saul then, before his conversion) was standing there in hearty agreement over his murder when that martyr uttered those precious words of mercy and compassion. I believe that this was, in large part, what Paul had in mind when he expressed his desire to know the fellowship of Christ’s sufferings, being conformed to His death. Paul, who once persecuted the church, had been transformed by God’s grace such that he desired to live, and die, after the pattern of men like Stephen, and ultimately Christ Himself. Thus, Paul wanted to endure to the end with a holy hatred of sin, but with a heart of compassion and mercy for the lost – just as Christ did (Luke 23:39-43).
It was this same godly desire of the Apostle’s that was found in the bosom of William Tyndale, whose sound teaching and faithful translation work afforded him nothing but years of affliction and persecution, the culmination of which was his execution based upon the trumped up charge of “heresy.” We read of his execution in Foxe’s Book of Martyrs:

“At last, after much reasoning, when no reason would serve, although he deserved no death, he was condemned by virtue of the emperor’s decree, made in the assembly at Augsburg. Brought fourth to the place of execution, he was tied to the stake, strangled by the hangman, and afterwards consumed with fire, at the town of Vilvorde, A.D. 1536; crying at the stake with a fervent zeal, and a loud voice, ’Lord! open the king of England’s eyes.’”

Here is a precious and faithful imitation of Christ Himself by our beloved brother William Tyndale. In his final moments, he remained true to God’s Word; disdaining heresy, but praying a prayer of mercy and compassion at the same time. Here in America, these stories seem all to distant and removed, for what we might be willing to call “suffering for the cause of Christ” is a faint flicker in the face of the fierce flames of persecution endured by many other saints around the world and throughout history. But our hearts ought not to be indifferent to such things – the Lord may call us to endure trials of the same nature within our own lifetime. We cannot know for certain what the Lord may bring our way, but this much we must understand, that if we are in Christ, then we too must seek to know Christ, and the power of His resurrection and the fellowship of His sufferings, being conformed to His death, so that through our lives and even through our own death, Jesus Christ may be praised.
O for grace to trust Him more!
This entry was posted in Uncategorized. Bookmark the permalink.